What We Know About Orlando Nightclub Shooter Omar Mateen

An undated photo from a social media account of Omar Mateen, who Orlando Police have identified as the suspect in the mass shooting at a gay nighclub in Orlando, on June 12, 2016.
Reuters
By Josh Sanburn

A fellow security guard who worked alongside Mateen in 2014 and 2015 described him to West Palm Beach’s WPTV as “an angry person, violent in nature and a bigot to almost every class of person.”

The coworker also told WPTV, “I saw it coming. I mean everything. He told me he was going to do it. Besides the date and the location, he said he was going to kill a whole bunch of people.”

Mateen’s ex-wife Sitora Yusufiy and others close to Mateen have also told news outlets that Mateen could be suddenly violent and abusive. According to the New York Times, Yusufiy said Mateen beat her and described him as “totally two different people sometimes, and would turn and abuse me, out of nowhere, when I was sleeping.” She also said he used anti-gay language.

Mateen’s wife, Noor, has reportedly told FBI officials that she drove Mateen to Pulse, where the attack occurred early Sunday morning, at least once. Noor said she tried to talk him out of attacking the nightclub, according to NBC News. The FBI is currently investigating whether Mateen was a regular at Pulse as multiple news outlets report that he visited several times and even contacted Pulse’s regulars on the dating app Grindr.

“Sometimes he would go over in the corner and sit and drink by himself, and other times he would get so drunk he was loud and belligerent,” Ty Smith, a Pulse club goer, told the Orlando Sentinel, which also reported that several Pulse attendees had seen Mateen in the club.

The Los Angeles Times reports that a man who regularly goes to Pulse had messaged with Mateen over the gay dating app Jack’d and spotted him near the club roughly an hour before the shooting.

Members of Mateen’s mosque, located in Fort Pierce, Fla., remembered Mateen Monday as a visitor to his congregation. Marian Alladin, a retired schoolteacher, told TIME that Mateen had paid a condolence call to her husband after he broke his leg in an accident. “That kid came to my house, he came with his wife, his son, and he sat with him,” she recalled, saying he was “very pleasant, very sociable.”

His mother and sisters are just like the other ladies at the center, multiple women say. They are well respected in the congregation, and known as good members of the community. “He came from a very nice family,” Alladin says.

Following the shooting, Mateen’s father, Seddique, said his son was angered after recently seeing two men in public kissing and later released a video saying that God should be the one to decide punishment for homosexual behavior. But he told CNN that the shooting was “an act of terror” and that he doesn’t forgive his son for his action.

Seddique, who hosts a TV show broadcast from California and shown on a satellite Afghan TV station, has expressed sympathy for the Afghan Taliban and has appeared to pose as the leader of Afghanistan in online videos. According to the Washington Post, in one video Seddique called for the arrest of Afghanistan’s political leaders.

Shortly before the shooting, Mateen called 911 and pledged loyalty to the Islamic State, but officials say that the shooting at Pulse was “homegrown” and not part of a broader plot directed by ISIS at targets in the U.S. According to FBI Director James Comey, Mateen also previously expressed sympathy for both al-Qaeda and Hezbollah, two groups in the Middle East with conflicting ideologies. 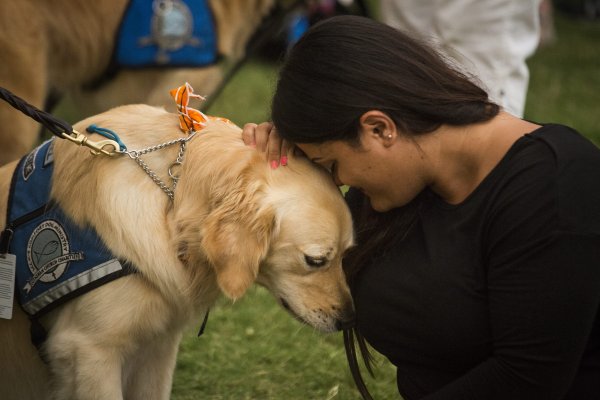 Comfort Dogs Are Coming From Across the Country to Console Orlando Survivors
Next Up: Editor's Pick