How to Handle These Incredibly Awkward Tech Situations

Modern problems. No matter the era, every generation has them. But in our tech-laden world, they seem to be popping up more quickly than ever. Facebook faux pas, Google gaffes, iPhone incidents — you name the technology, and there’s a way to misuse it.

According to Lizzie Post, cohost of the Awesome Etiquette podcast and president of the etiquette-tracking Emily Post Institute, this is because new technologies emerge faster than we can figure out how to politely use them. Here are Post’s tips on how make sure everyone plays nice with their tech.

1. People Using Phones in the Movie Theaters and Restaurants

Whether it’s the glowing screen of someone texting in the dark, or the incessant murmur of somebody talking through a movie, the distraction of smartphone-using cinema goers is something most people have contended with. But it’s not safe to handle these handset addicts yourself, says Post, pointing to a 2010 Los Angeles movie theater argument over cell phone use that ended with someone being stabbed in the neck with a meat thermometer.

“You never want to approach a stranger,” she says. “Your safety always trumps etiquette.”

So if you’re in a restaurant, have a host or manager request that the patron tone down their talking. And at a movie theater, let the usher handle it. “You don’t know someone else’s temperament or mental balance — you don’t know anything about them,” says Post.

With all the private data crammed into smartphones, they may be the most personal devices going. That also makes them one of the most volatile objects around, so much so that Post equates us and our phones with “Gollum with the ring.”

“This is in some way the precious device—they do carry an immense amount of personal information on them,” she says. So before you handle someone else’s phone or sneak a peek at their screens, remind yourself of that. “Try to keep your eyes off other people’s phones, unless they intentionally asked you to look,” she says.

But if you do hand your handset over to someone else, tell them where they can navigate to, whether it’s swiping left over a few photos, reading one screen’s worth of texts, or only tapping on one app.

3. Children Pawing at Your Electronics

With flashing lights and colors radiating outward, smartphone screens are like catnip for kids’ eyeballs. Young children are going to reach for the smartphone or tablet almost instinctively, and it’s up to adults to abide by their parents’ electronic preferences.

But older children, especially teens, should be able to demonstrate judgement and show restraint. “It’s really important for households to establish digital rules for the house,” says Post. For instance, if a home only allows 30 minutes of screen time per day, and a visiting child is typically given an hour, he or she is now playing by the house’s rules. “It’s really important that visiting kids respect that,” says Post.

4. Drones Hovering in Your Space

Two years ago, this might seem like an absurd scenario, but with the increasing popularity of drones, its reasonable to expect you may get your tower buzzed sometime soon. It may be jarring at first, but according to Post, a drone is just a camera — the same thing that you may be using to take a selfie in that same setting — only in a new form factor.

And if you’re in a public place, like picnicking in the park, good luck telling them to buzz off. “Unless someone is literally hovering a drone over you, I don’t think you have license to tell them much of anything,” she says.

On the face of it, requesting a home’s Wi-Fi credentials might seem like a minor ask. But as homes’ data setups get more complicated, it’s actually a fairly sizable demand. First, there’s the password itself, which could be used in the homeowners’ other accounts. (Do not do this. It undermines your accounts’ security.) Second, from networked drives to other machines connected to your Wi-Fi, there is a great deal of sensitive information accessible to anyone who has your Wi-Fi password. It’s the equivalent of handing the keys to your medicine safe, car, and office to someone who just walked into your house. Make a guest network and let them use that instead.

But Post goes further — she sometimes declines to give out the password. Imagine a dinner party where people ask for the Wi-Fi password. “I’m happy to give it to you, but why do you need it?” asks Post. “You’re supposed to be enjoying the company of the people here.”

For baby- or pet-sitters, watching the home’s television has long been just part of the job. But now with algorithmically-driven streaming services like Netflix, watching a romantic comedy on someone’s action-flick heavy account is almost like re-arranging their furniture while they’re out for the night.

So, do you use the house’s streaming accounts or not? That’s up to the homeowner, says Post. “It’s very similar to the refrigerator,” she says. So, while you might tell your guest to help themselves to anything in the kitchen (except for that one Tupperware with an appetizer made for tomorrow’s cookout), you should be explicit with guests about using your digital accounts within your home.

And as televisions continue to bake these streaming services into their user interfaces as people continue to cut the cord, this kind of tech behavior will become a norm — and not so awkward — in the future. 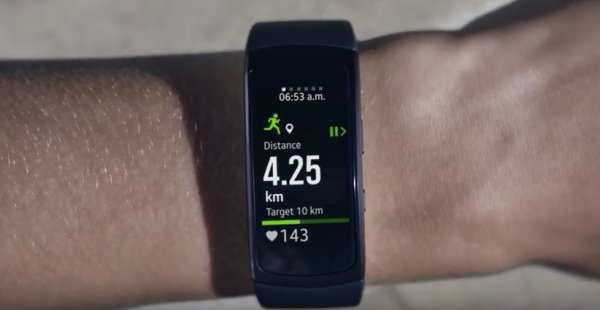 Samsung's Fitbit Competitor is Impressive But Complicated
Next Up: Editor's Pick