Catherine, Duchess of Cambridge signs a book of condolence for the Orlando mass shooting victims while Prince WIlliam, The Duke of Cambridge looks on at the US Embassy on June 14, 2016 in London, England.
Philip Toscano—WPA Pool/Getty Images
By Simon Perry / People

Prince William and Princess Kate paid their respects on Tuesday to the 49 victims of the Orlando shootings.

The royal couple made a surprise visit to the U.S. Embassy in London on Tuesday to show their solidarity with those who lost loved ones at the Pulse nightclub.

William and Kate signed the book of condolence that was been opened at the embassy in the wake of the attack.

They were greeted by U.S. Ambassador Matthew Barzun.

With Kate by his side, William paused for a moment to read the ambassador’s dedication in the book.

William wrote “With our deepest condolences and with our thoughts and prayers to all those affected” before signing his name. Then his wife followed, signing “Catherine.”

After signing the book, they spoke to embassy staffers who have worked on LGBT issues.

Dozens of embassy workers, all wearing custom-made badges with a combination of the American, British and Pride flags, filled the lobby for the royal visit.

Later today, the couple will be in Northern Ireland, where they are set to attend a garden party at the city’s Hillsborough Castle. It is the first time they have visited the province since shortly before their wedding in 2011.

The city of Orlando is very much fresh in the minds of the royals. Prince Harry was welcomed there last month when he brought his Paralympic-style Invictus Games to the United States. 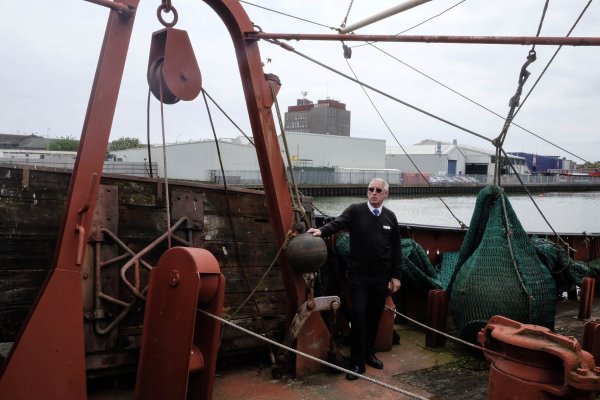 Meet the British Fishermen Who Want Out of the E.U.
Next Up: Editor's Pick