Snapchat Is About to Have Way More Advertising

Snapchat has been evolving rapidly over the past few months by adding features and redesigning the app to boost its appeal, not just with teens, but also older users as part of a campaign for total media domination. And now it has launched a second front: On Monday, it rolled out its much-anticipated ad partner program.

In many ways, Snapchat has been preparing the ground for this move for some time now. It has been working on the ad partner program since the beginning of the year, including an API, or application programming interface, that will make it easier for advertisers to automate their ad buying. And the company has also been re-configuring the app so that those new advertising ventures will hopefully blend in better.

Just last week, Snapchat rolled out some fairly significant changes to the app that have turned it into much more of a stream of real-time content, with items from the Discover section—which includes video updates from outlets such as CNN and BuzzFeed—mixed in with Live Stories from news events and media partners. Publishers can now add images to their videos so that they look more appealing to users, and users can subscribe to specific publishers.

Snapchat has offered video ads for almost a year now, using a format it calls 3V—for “vertical video views”—but they have been created in-house and offered to a fairly small range of advertisers. Now, ads from outside agencies will start appearing in between the Snapchat Stories in users’ streams. And some of these will be programmatic in the sense that they will be delivered into the stream via the new API.

The new Partner program has two categories: One group includes companies like Moment Studio, Stun Creative, and Truffle Pig (a joint venture between Snapchat, ad giant WPP Group and the Daily Mail) that will help advertisers create the actual campaigns that use Snapchat’s vertical video format. The second group—which includes providers like TubeMogul, Adaptly and VaynerMedia—is made up of technical providers that can help advertisers optimize their ads.

What used to be called 3V are now just known as Snap Ads, and the company says it has been testing several ad units that have high rates of engagement with users: One allows them to swipe upwards on the app and watch a longer video, another lets them read an article and a third lets them access a website without having to leave the app. Snapchat also offers app-install ads that allow users to swipe and download an app from Apple or Google.

The company will still have the premium video-ad business that it launched a year ago at the Cannes festival, which reportedly pulls in CPM (cost per thousand impression)rates as high as $60—in part because Snapchat says it has 10 billion video views a day, more than Facebook. And it has sponsored Filters and Lenses, which have been fairly successful in several cases: Taco Bell launched a lens for Cinco de Mayo that was used more than 220 million times.

What Snapchat is adding with its new offering is a business that is somewhat lower priced than its custom ad operation, and also allows for more automation, while still getting ads in front of the app’s 150 million or so daily active users—a larger number than Twitter has, according to a recent report from Bloomberg. And Snapchat says it will be reviewing every programmatic ad so that they meet the company’s standards and don’t pollute the stream.

One thing is for sure: The company needs to expand rapidly if it is going to meet the ambitious targets that appeared in a recently leaked pitch deck. In the presentation—which presumably helped it land a new financing round of $1.8 billion that gives it a theoretical market value of $20 billion—Snapchat says it expects to have revenue of about $300 million this year and between $500 million and $1 billion next year. Last year, the company made just $59 million. 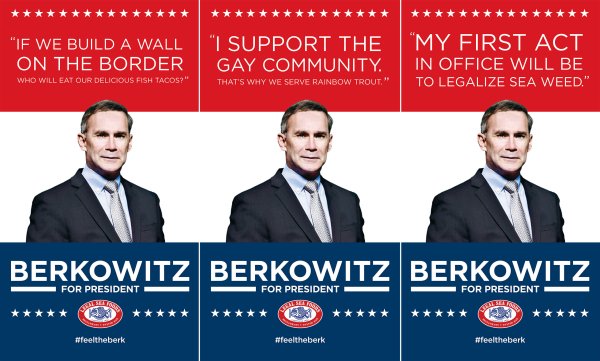 These Look Like Campaign Ads. But They're Something Entirely Different
Next Up: Editor's Pick