Thousands gather at the Dr. Phillips Center for the Performing Arts to pay their respects for those lost in the Pulse nightclub shooting in Orlando on June 13, 2016. Candlelight vigils and remembrances for the victims of the shooting at Pulse, a gay nightclub in Orlando, Florida. Early Sunday, an American-born man who had recently pledged allegiance to ISIS opened fire in the nightclub killing at least 49 people, in the worst mass shooting in U.S. history.
Samuel Corum—Anadolu Agency/Getty Images
By Zeke J Miller / Orlando

They held burning candles aloft in tearful silence as the single church bell tolled, the pauses between chimes just long enough to dull the anticipation of the next. For nearly five minutes the bell atop Orlando’s First United Methodist Church rang 49 times, the echoes reverberating across the plaza across from city hall. Each represented one of the 49 lives lost early Sunday morning when a hate-filled gunman opened fire at the Pulse nightclub one mile away.

Nearly 10,000 people filled the square in downtown Orlando in the searing evening heat to mourn those lost and pray for the injured. Local political, law enforcement and faith leaders joined with Latino and LGBT leaders to try to begin the healing process after the worst mass shooting in American history — and the largest terrorist attack in the country since 9/11.

“Tonight we remain a city in pain,” Orlando Mayor Buddy Dyer said, flanked by local leaders and Orlando police chief John Mina, credited with ordering the operation that rescued dozens trapped inside the nightclub. “We are mourning and we are angry.”

The vigil marked a somber day of grim accounting in the city, as medical examiners completed the identification of the dead and officials finished the notification of family members of the fallen — a task completed just before the vigil began. The Orlando Gay Chorus performed Cyndi Lauper’s “True Colors” and the Beatles’ “Let It Be,” as hundreds of people held homemade signs, rainbow and American flags and flowers toward a makeshift memorial on the green in front of the Dr. Phillips Center for the Performing Arts.

But through the agony, Dyer predicted the city would emerge stronger from the tragedy. “We can’t wait to show the world that joy and love conquers hate,” he said. “Hate will not define us. Hate will not defeat us. Because we are One Orlando.”

He announced the formation of the One Orlando Fund, a nonprofit to help the victims and their families — 53 were injured in the attack, and dozens remain hospitalized — which raised more than $700,000 in its first few hours from local businesses.

Imam Muhammad Musri, president of the Islamic Society of Central Florida, joined the Rev. Bryan Fulwider on stage to condemn the atrocity committed by Omar Mateen, a Muslim who officials said was radicalized online and pledged allegiance to ISIS before he was killed in a shootout with police officers.

“We are deeply hurt,” Musri said. “Our heart is broken. Our lives are upside down … We cannot believe that someone who claims my peaceful faith brought a massacre, an atrocity on our city.”

Musri called on Muslim leaders across the country to gather on the National Mall in Washington next month to condemn extremism. “We call on Muslim leaders around the world to stand up and deal with this cancer once and for all,” he said.

Neema Bahrami, the manager of the LGBT nightclub, joined more than two dozen Pulse employees past and present to proclaim that the nightclub will rebuild.

A formal memorial service was being set for Thursday, with President Obama planning a trip to the city, the White House said late Monday. 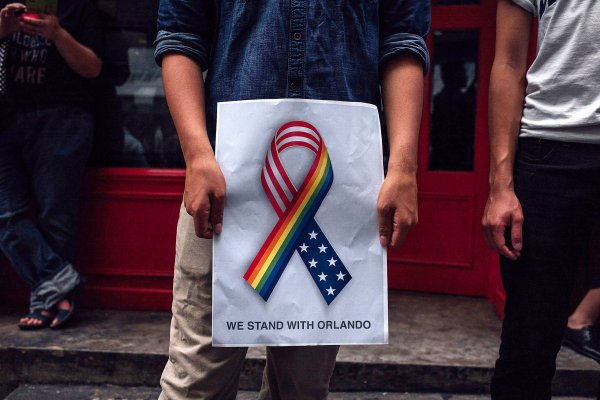 Orlando Victims GoFundMe Raises $2 Million in a Day
Next Up: Editor's Pick