The owner of the shooting range where Orlando shooter Omar Mateen bought the handgun and semi-automatic used in the deadly rampage over the weekend says he bought both weapons legally and passed a thorough background check.

Ed Henson, owner of the St. Lucie Shooting Center, confirmed in a press conference Monday that Mateen bought a handgun and long gun there about a week or 10 days before the attack.

“I am truly truly saddened and shocked by this terrorist act,” said Henson, a former NYPD officer who worked out of the World Trade Center on September 11, 2001, and was also a first responder at the Flight 587 plane crash in Queens later that year.

Henson said Mateen purchased both guns legally, and separately, and did not buy or inquire about body armor. He repeatedly referred to Mateen as an “evil person.”

The owner also said he wanted to “avoid any political issue.” He said Mateen completed the three-day waiting period to buy a handgun under Florida law, but was allowed to walk out with the AR-15 type rifle the same day he bought it, also in compliance with Florida law. Even though Mateen had twice been investigated by the FBI for ties to terror networks, those investigations did not disqualify him from buying the guns.

That loophole, often called the “terror gap,” means that the federal government has no way to prevent terror suspects from purchasing weapons. According to research compiled by Everytown for Gun Safety, a nonpartisan research group devoted to reducing gun violence, people on the terror watch list attempted to buy firearms or explosives 2,233 times between 2004 and 2014, and were successful 91% of the time.

The shooting range was closed Monday afternoon for a visit from the Bureau of Alcohol, Tobacco, Firearms and Explosives. Hanson said the ATF found that the range was in full compliance with Florida law. “I’m sorry he picked my place,” he said. 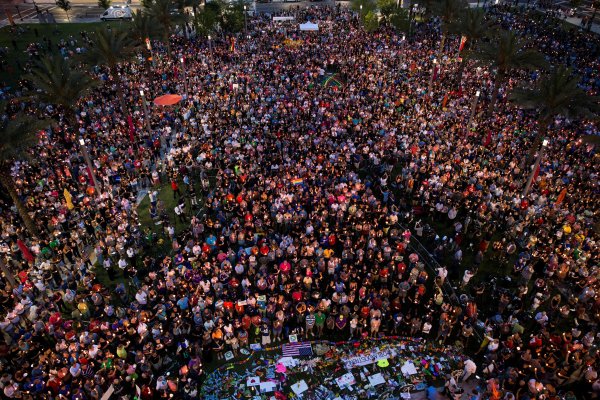 Thousands Gather in Orlando for Somber Vigil
Next Up: Editor's Pick