Men hug during a vigil in a park following a mass shooting at the Pulse gay nightclub in Orlando Fla., on June 12, 2016.
Carlo Allegri—Reuters
By Alejandro A. Francisco / xoJane

This article originally appeared on xoJane

I’m a young, gay man who was born in New Jersey and grew up in Orlando. I love my friends, I love my parents, I’m half Puerto Rican, half Dominican, 21 years old, and at 2 a.m. on Sunday morning, you almost took my life.

I go to Pulse nightclub in Orlando because I feel comfortable there, and I can be myself. Several of my friends were there that night, including my friend Stanley. I will never see Stanley again. You took that away from me.

Saturday night was Latin night, and it was a party vibe because of the Puerto Rican Day Parade. It was a hot night, and the club was filled with life and love and dancing and — until you arrived — pure joy.

My friends and I arrived at Pulse around 11 p.m. I’ve been going to the club for a few years now, and it’s a wonderful place to let loose and really be yourself in Orlando. We had been having an amazing weekend, and we were planning to stay until it closed, but as it turned out, my friend Vincent had the premonition that he wanted to head out before everyone tried to leave at once, since last call was already upon us.

My friend Vincent saved my life.

Across the street, moments after we left, we heard the gunshots start. They sounded like firecrackers. We were terrified. We saw people running all around us, some of them jumping fences. We had no idea the all-consuming nightmare we narrowly escaped inside.

Minutes after we left, without realizing how precious those minutes were, that’s when the massacre began.

These men and women were strangers to you. All of them had one precious gift, one saving grace that you could never, ever have. That much is clear. I know you had a child and a wife and a father and a mother, but you did not have what they had. You never could have. What happened never could have happened if you did.

But Omar, you failed.

You tried to massacre the very one thing that you can never destroy in our community. Ever.

You cannot take away our love.

It is more powerful than anything else that exists in the world.

Violence had long been part of my life. Ever since fifth grade, I have been made fun of and called a faggot and had to fight for dignity and pride all my life. But in that moment when I came out to my mom, she looked at me, and she knew. I could tell she had always known, and she loved me so much. She gave me a look that told me she would love me forever.

And… she didn’t care. She saw me as her son. She saw me the same way she had always seen me. She saw me with the healing, transformative eyes of love.

I am so sorry you must not have ever had that in your life. Otherwise, I can’t imagine you would have wanted so badly to end mine.

In the aftermath of almost dying, of narrowly escaping your wrath, my friends and I have been walking around like zombies all day. We survived, but now all we have are questions. What do we do now? Why am I still here? How could this have happened?

And of course — why, why, why do you hate us like you do?

I know that there is only one answer. Every time I ask these questions, it is the only thing that makes logical sense to me in this sea of devastation and heartbreak and grief.

I think about Eddie Justice who sat in the bathroom and sent those terrified texts: “I’m gonna die. Mommy, I love you.”

Violence all around him, and he found the love.

Omar, we are stronger than your hate. We always will be.

Eddie did not survive.

In fact, it just grew stronger. 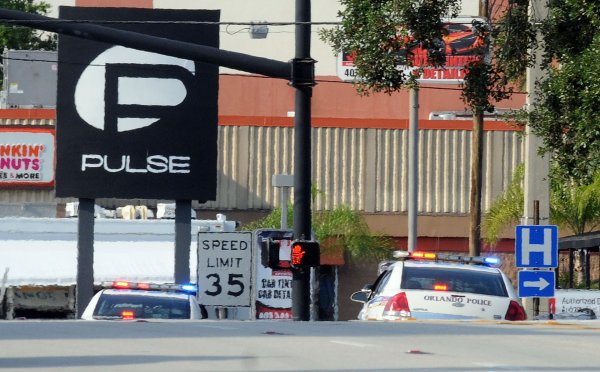 What We Know About Pulse Nightclub, Site of the Deadly Orlando Shooting
Next Up: Editor's Pick