Why Donald Trump Might Be Wrong About the Economy

Republican presumptive nominee Donald Trump doubled down on a larger theme of his presidential campaign in a speech Wednesday, arguing that the American economy, once an engine of prosperity, is in precipitous decline.

“The real wages for our workers have not been raised for eighteen years,” he said, repeating a familiar lament about job destruction, open borders, and stagnating incomes.

Trump’s strategy is essentially the same as Mitt Romney’s in 2012. The idea is to appeal to struggling voters’ feelings of economic malaise—and then to ask them, implicitly or otherwise, to make the decision: Are you better off today, under a Democratic administration’s leadership, that you would be with a Republican at the helm?

To millions of Americans, particularly the white, working-class voters who make up Trump’s base, it’s an effective appeal. Many voters have indeed watched their economic prospects wither in the past two decades, as the forces of globalization, automation and outsourcing have destroyed and dismantled traditional jobs. In the twenty-seven years since 1989, real median household income in the U.S. has increased a piddling 0.7%. Between 2006 and 2014, it has declined nearly 7%.

But there’s a problem with Trump’s argument. If you control for demographic changes—Baby Boomers retiring, an influx of young Millennial workers, etc.—the macroeconomy is not only improving, but real wages have been increasing for years.

According to a new study from the Federal Reserve Bank of San Francisco, real wage growth has averaged about 2.4% in the past two years. In 2015 alone, full-time workers saw wages increase 3.5% above inflation—nearly double the rate of wage increases in 2010. Average wage increases have also ticked up regularly, month by month, since January 2010, according to the Federal Reserve Bank of Atlanta.

All this puts Trump’s rival, presumptive Democratic nominee Hillary Clinton, in a better position. Since launching her campaign last spring, Clinton has run on the promise that she would protect and expand President Obama’s economic policy platform. It makes her sales job easier that those policies not only appear to be working, but that many Americans are feeling it.

According to a new Federal Reserve’s report on the Economic Well-Being of U.S. Households in 2015, nearly 70 percent of Americans now say they’re “doing okay” or “living comfortably.” Just 18.5 percent say they’re “worse off.” Those numbers, while not quite stellar, mark a major improvement from 2013, when the same study, asking the same questions, found that nearly 40% of Americans reported that they were struggling economically.

Read next: How The Election Will Really Affect Your Investments

One reason for the disconnect between Trump’s gloomy statistics about declining wages and Americans’ slightly sunnier outlook is a muddiness in the way we measure economic prosperity. If you look at real—i.e. inflation-adjusted—median income of American households, Trump’s assessment of American workers’ stagnating wages appears right on. But that’s not comparing apples to apples.

As fertility rates have fallen and as it’s become more common to live alone, American households have shrunk by roughly 3.4% since the late ‘90s. So comparing a household of two people to a household of four doesn’t necessarily give you a meaningful window into relative prosperity. After all, a four-person household earning the equivalent of $60,000 in 1989 is not necessarily better off than a two-person household earning $45,000 in 2016. Yet if you compare the two as static data points, it would appear as if household incomes are declining.

Comparing real household income also doesn’t take in account other quirks of American demographics, such as the aging population of Baby Boomers. Members of that generation have long enjoyed the highest salaries, so when the oldest among them began retiring in 2008—and swapped those pretty paychecks for pensions—they artificially skewed income downward. The same thing happened when the large Millennial generation, those born in the early 1980s, entered the job market for the first time. As nearly all young people do, they secured relatively low, entry-level salaries, which had the effect of skewing averaging income down. In other words, according to the San Francisco Federal Reserve report, median household income is declining—but that’s not a fair measure of Americans’ relative prosperity.

A better measure would be to look at real incomes of Americans on an individual basis. According to the Bureau of Economic Analysis, most individual Americans’ real income grew 1.9% from February to December 2013. In 2014, they grew another 3% and last year, they jumped another 4%. The average American today makes 13% more than in 1989, and that number has been climbing steadily since the end of the Great Recession.

The Millennial generation, born between the early ‘80s and the mid-1990s, has done even better. According to a June analysis by the economist Robert Shapiro, between 2009 and 2012, young people saw their incomes tick up 3.2%. Between 2013 and 2014, they rose another 4.3%. Members of Generation X, who saw their incomes drop in the recession, have seen average 2.3% increases between 2013 and 2014. The youngest among the Baby Boomer set—the youngest who have not yet retired—saw the biggest hit during the recession, losing more than 1% of income on average, but have since rebounded by a half a percent.

That’s not to say that today’s economy is all sunshine and unicorns. GDP growth is sluggish, productivity is falling, the markets are skittish, and while Americans have seen their wages increase, they’ve seen their expenses balloon, too. The cost of child care is now almost double what it was in 1986, the cost of health care is increasing by roughly 5% per year, and people are getting into ever more debt.

Which is perhaps one reason that Clinton’s stump speech still sounds a cautionary note. In the same breath that she commits herself to expanding Obama’s successful economic policies, she often adds that they have not done enough—that there’s more work to be done. “I respect the fear, the anxiety, even the anger that a lot of people are feeling because the advance of globalization and technology has really replaced or undermined the future for many jobs,” Clinton told the Washington Post in an interview this week. She added that many Americans “are looking for somebody who will explain, in a way they will accept, what’s happened.”

In this election, both presumptive candidates’ explanations—and their solutions—are markedly different. Clinton generally offers a wonky account of the shifting global economy and the changing nature of jobs in the future, and suggests an equally wonky set of incremental policy provisions.

The election won’t be decided by these reports, but rather by which of those two visions of the economy feels most right to voters. 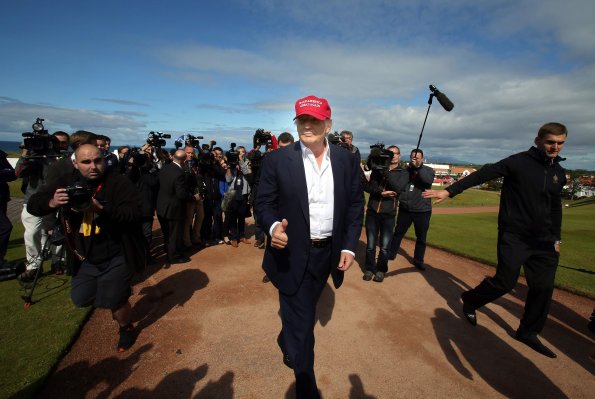 Why Some People in Scotland Really Hate Donald Trump
Next Up: Editor's Pick