The science in Japan’s “scientific” whaling program has always been a little, well, questionable. Commercial whaling is essentially illegal for all nations that remain part of the International Whaling Commission (IWC). Norway and Iceland, two countries that continue to whale, get around the IWC’s 1986 moratorium by simply rejecting it. Japan, which is still a member of the IWC, has sidestepped the moratorium for years through subtler means, establishing a research program that allows the country to kill 3,600 minke whales since the studies began in 2005. Exactly what scientific information Japan’s whaling fleet is gathering through legal slaughter has never been clear — though what’s not in doubt is the destination of the whale meat taken in the hunt, most of which ends up in the handful of restaurants and markets in Japan that still serve whale.

If a scientific whaling program sounds like an oxymoron to you, the U.N.’s International Court of Justice (ICJ) apparently agrees. On Monday the ICJ ordered a temporary halt to Japan’s Antarctic whaling program, ruling that the country had failed to provide any scientific justification for its whaling. “The court concludes that the special permits granted Japan for the killing, taking and treating of whales … are not ‘for purposes of scientific research,'” presiding judge Peter Tomka said, reading the court’s ruling on a case originally brought in 2010 by the government of Australia. The program, he said, “cannot be justified.”

The Japanese government obviously disagrees with the decision, but Foreign Ministry spokesperson Noriyuki Shikata told reporters that Japan would “abide by the ruling of the court” — meaning that for now, at least, Japan’s annual Antarctic hunt is off. For environmentalists who have fought Japanese whaling for years in international courts, the court of public opinion and sometimes on the oceans itself — as seen in the reality-TV show Whale Wars — Monday’s decision was a moment to celebrate. Former Australian Environment Minister Peter Garrett, who originally launched the suit when his government was still in office, told the Australian Broadcasting Corp. that Antarctic waters would become a true sanctuary for whales:

The court’s ruling doesn’t mean that all Japanese whaling will immediately cease. The country has a smaller scientific program in the northern Pacific that will likely now be challenged under the same grounds. The court also left the door open for Japan to resume scientific whaling if it can redesign its program, as Tokyo has claimed it needs data to monitor the impact of whales on its fishing industry. And Japan has always held out the possibility that it could simply withdraw from the IWC altogether, so that it would no longer be bound by the commission’s decisions.

Whaling has never been just about whaling in Japan. Though some coastal towns in Japan have hunted whales for centuries — I visited one such village, Oshika, back in 2005 — Japan only became a whaling power in the wake of World War II, when some of its decommissioned naval vessels were converted into whaling ships and when U.S. occupation officials encouraged the harvesting of whales as a cheap form of protein. The drive to keep whaling today has much less to do with a taste for whale meat — which has long since waned — than it does with the government’s worry that any limit on whaling could set a precedent for Japan’s far more vital commercial fishing industry. Tokyo is right to worry — bluefin tuna, which can fetch tens of thousands of dollars at Tokyo’s Tsukiji fish market, are highly endangered as well.

There’s also the reality that hunting is just one of many threats that whales face today. Whales can be killed accidentally as bycatch, poisoned by pollution, even driven crazy by noise from ships. And like nearly every other species on the planet, whales are threatened by climate change — especially species like bowhead and beluga that live in the rapidly warming Arctic. But on a day when environmentalists are still reeling from the dire predictions in the latest U.N. climate change report, today’s ruling is a rare glimmer of good news. 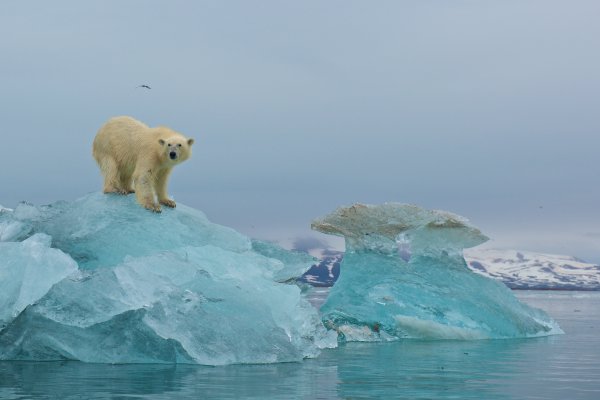 U.N.: Climate a Threat
Next Up: Editor's Pick