How Donald Trump Used the Orlando Shooting to Sow Division

The scripted address, the moment of silence and the gestures of solidarity toward the gay community all seemed to suggest a different Donald Trump might have shown up Monday in New Hampshire. But in the wake of the deadliest mass shooting in U.S. history, the presumptive Republican nominee instead sharpened the theme that has marked his upstart campaign: the threat of the immigrant lurking among us.

Trump decried the inadequate screening and “tremendous flow” of Syrian refugees. He reiterated his support for a temporary ban on Muslims entering the U.S. even though the suspected shooter was born in America. And he moved to further restrict Islamic immigration by calling for the country to close its borders to nations with a record of exporting terrorism.

“When I am elected,” Trump said in a prepared speech at Saint Anselm College outside Manchester, “I will suspend immigration from areas of the world when there is a proven history of terrorism against the United States, Europe or our allies, until we fully understand how to end these threats.”

Read More: Transcript of Trump’s Speech on the Orlando Shooting

It was a promise that no other major-party nominee in modern history would have made. In the anguished aftermath of the Sept. 11 attacks, President George W. Bush was careful to delineate the difference between a war against a terrorist sect and a war against Islam. When rally-goers called Barack Obama a “terrorist” and an “Arab” in the waning days of the 2008 campaign, John McCain defended his opponent’s decency. Even as he criticized Obama’s approach to combatting terrorism, Mitt Romney described Islam as a religion of peace.

This is not Trump’s style. Throughout his life, he has often found the seams in the cultural fabric and exploited them for personal gain. And he has brought the tactics of tribal warfare from business into politics. Since the start of his campaign, he has cast nonwhite groups, American citizens or not, as a threat to the nation’s security and way of life. People coming over the border are “bad hombres.” Black Lives Matter protesters are “bad dudes.” Refugees fleeing war-torn Syria “could be a better, bigger, more horrible version than the legendary Trojan horse ever was,” Trump warned Monday.

The same impulse that prompted Trump to attack an American judge of Mexican heritage was on display in a national-security speech that was supposed to be sober and measured. Trump’s is a campaign in which law-abiding citizens are suspect simply because of their background, and entire classes of people become sleeper threats.

The facts often don’t match the rhetoric. The GOP nominee noted that the suspected killer — a Queens, N.Y., native, just like Trump — would not have committed the atrocity in Orlando had his Afghan parents been denied entry to the U.S. “According to Pew Research, 99% of people in Afghanistan support oppressive Shari‘a law,” Trump said, explaining the roots of his idea to bar immigrants from countries that incubate Islamic fanaticism. Shari‘a, or Islamic law, is often misconstrued in the West as a system that relies on ghastly retributive justice — such as punishing adultery with death by stoning, or cutting off the hand of a thief.

But Shari‘a is a broad term for the set of ethical principles inscribed in the Quran. It means different things to different adherents. “People understand Shari‘a to be rule of law, justice and rights,” says Intisar Rabb, director of the Islamic Legal Studies Program at Harvard Law School. Trump, says Rabb, has adopted Shari‘a “as a bogeyman against which he can fight and have a platform to get elected. That strikes me as very irresponsible, and it is false.” Demonizing every Muslim by equating Shari‘a and terrorism is akin to describing every Christian as a radical fundamentalist; the Bible can also be interpreted as requiring brutal punishments for archaic offenses. Meanwhile, the same Pew survey showed that majorities in every Muslim region — including the South Asian nations where support for Shari‘a runs highest — say it should apply only to Muslims.

Trump often speaks of the violence perpetrated by immigrants. On the campaign trail, he likes to invoke the murders of Kate Steinle and Jamiel Shaw as examples. But studies show that immigrants are less likely to commit crimes than the native-born.

Or consider the Syrian refugees that Trump has moved to block. “Under the [Hillary] Clinton plan, you’d be admitting hundreds of thousands of refugees from the Middle East with no system to vet them,” he said. In fact, refugees from countries like Syria and Iraq are the single most heavily vetted group of people that enter the country. So far in 2016, the U.S. looks poised to fall short of its modest goal of resettling the 10,000 Syrian refugees it has agreed to accept this year. About half of those entering are children, according to U.S. officials.

But in a presidential campaign suffused with fears of terrorism, Trump is seizing a chance to sow suspicion — and to frame himself as uniquely positioned to make the country safer. “It’s us-against-them politics,” Roger Stone, a Republican consultant and longtime Trump adviser, told TIME in March. “You define yourself by who your enemies are.”

That’s why Stone suggested without evidence on Monday that Clinton confidant Huma Abedin, who was born in Michigan to South Asian parents, might be a “Saudi spy” or a “terrorist agent.” It’s why Trump hinted that Obama himself might have unsavory connections that have altered his approach to terrorism. “Look, we’re led by a man that either is not tough, not smart, or he’s got something else in mind,” Trump said. “There’s something going on. It’s inconceivable. There’s something going on.”

Such tactics have served Trump well in a Republican primary thick with aggrieved partisan. But Republican strategists worry Trump’s strategy of division won’t work in a fall campaign where the electorate is far more diverse. “The general election is a business of addition,” says veteran GOP strategist Scott Reed. “It’s not divide-and-conquer. There aren’t enough people to divide.”

— With reporting by Elizabeth Dias 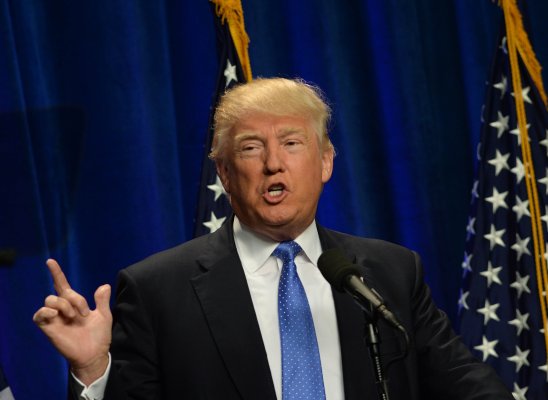