As per usual, Apple’s annual developer’s conference followed on the heels of Google’s, with the tech giants trumpeting their latest updates for both consumers and coders one after the other. On Monday, CEO Tim Cook’s team repeated some of the same tropes and themes as their rivals, from making several Gold State Warriors references to announcing crowd-pleasing features that attempt to minimize taps and maximize our ability to be expressive through our texting machines.

But if Google’s big point was emphasizing how human-like its technology has become, Apple’s was emphasizing how much the company cares about humanity itself — even if many of the biggest cheers came in response to updates about things like triple-size emojis.

Apple can seem like an exclusive tower made of silicon and secrets, and the company knows that is part of its appeal. Thousands of developers were kept in masses behind guardrails leading up to the keynote. When the 5,000 eager attendees reached the threshold, they were greeted by signs that said “Hello golden ticket. Hello behind the curtain … Hello bragging rights.”

Cook spent his relatively brief time on the stage mostly talking about people. The first instance of this was hardly a choice, as he began by taking a moment to acknowledge the tragedy that had taken place in Orlando the day before. But during his closing speech, he espoused the kind of tech-utopian lines that get parodied in Silicon Valley. “At Apple,” he said, “we believe technology should lift humanity.”

The keynote was split into four sections — on the Apple Watch, Apple TV, desktop computers and the iPhone — with inclusive, solicitous interludes.

As director of fitness Jay Blahnik ran through activity improvements to watchOS, for example, he dedicated a portion to Apple’s work on better gauging activity for users who are in wheelchairs. He explained how they analyzed different types of wheel-thrusting and added, to much applause, that instead of simply reminding wearers to be active by saying, “Time to stand,” the watch would also say, “Time to roll.” He then launched into describing a new app called Breathe, designed to help you better manage your everyday stress through deep-breathing techniques. “Simple things,” he said, “can be very powerful.”

More time than seemed to interest the crowd was spent on a new photo feature called Memories. When iPhone users update to iOS 10 in the fall, they will be “serendipitously reminded” of family trips and snowball fights and hikes and whatever else they might have documented on their smartphones. Apple will not only smartly arrange photos in scroll-able albums but autogenerate shareable slideshows, with soundtracks and fades. The feature, said Apple’s software-engineering guru Craig Federighi, is designed to “surface memories that are relevant to you.”

The open arms were extended to developers as well, as executives announced time and again that landmark Apple tools — from Siri to iMessage to Maps — would be opened to third parties.

As the keynote winded down, Cook announced that the company had developed an app for kids that would teach them how to use the programming language Swift, one tuned to work well with Apple’s products. And he described this as a “gift” the company would be giving away for free, as part of the vision that coding should be a “required language in all schools.”

That announcement was followed by a reel of developers already making apps for Apple, and the cast of characters was pointedly diverse — young and old, kids and moms, coders from America to Beirut. “I can’t wait to see what this next generation of coders is going to create,” he said. “Our quest is to change the world for the better.” And, it appears, to convince everyone that if they stick with Apple in the tech wars, they too could get a golden ticket. 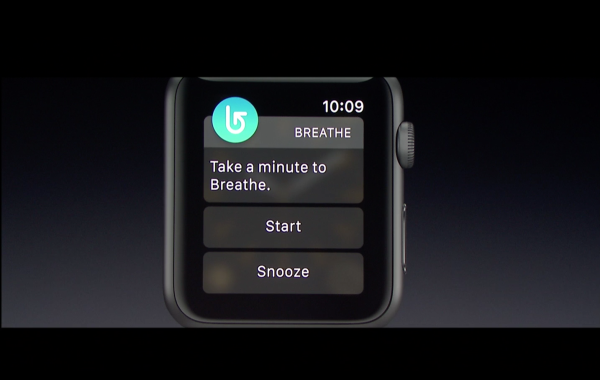