How to Get Your Kid Interested in Theater—and Why

Actress Renee Elise Goldsberry speaks onstage to accept the award for Best Performance By An Actress In a Featured Role In a Musical for her work in Hamilton during the 70th Annual Tony Awards at The Beacon Theatre on June 12, 2016 in New York City.
Theo Wargo—Getty Images for Tony Awards Productions
By Carey Wallace

American theater has a big night when the Tony awards are passed out and people who can’t always get to the theater get to see some of its stars. But you don’t have to watch an awards ceremony on TV to get your kid interested in theater,nor do you have to shell out for a Broadway show.

In a world where parents and experts are increasingly concerned about an “empathy gap” among young people, theater “encourages empathy,” Krieger points out, by drawing audiences into the experiences of others. In a world crowded with special effects, theater “stimulates creative imagination,” Krieger says, by relying on the audience to imagine a new world based on simple scenes and props. And theater also breaks through the isolation of the digital age by getting “a group of people in a room together, experiencing real people in real time.”

At elementary age, Krieger says, theater is a great activity to “share with your family”—partly because most kids at that age are going to be attending along with parents. But even with young kids, says Krieger, parents should look for shows that are interesting both to kids, and to them. “You know your kids, and you know your interests,” says Krieger. “If you’re not going to be interested, this is not going to work.” But when both parents and kids are engaged in a show, she says, “that’s what stimulates the conversation”– which can range from talking about everything from the costumes to the deeper themes of the story.

Middle school students may not be crazy about going to a show with parents, Krieger acknowledges. But parents can encourage them to go see a show with friends—and then talk about what they got out of it. Sometimes it’s easier for kids may to think about their lives through a play, says Krieger: “you can put yourself in someone else’s shoes. You can see how a character is solving a problem that might be similar to yours.”

High school kids are old enough to do more than just see a show, says Krieger. A little prep work before a play can “get everybody enthusiastic about it.” If the play is a well-known classic, Krieger suggests, it’s relatively easy to read the script before seeing the performance. Kids can also learn about the time or place where the play is set in advance—or even find out more about the performers and director they’ll be seeing. And they’re also old enough to understand how unique every single live show is, says Krieger: “Nobody else but you will ever see this. No performance is ever the same.”

Perhaps next year, your kid will might even want to watch the Tonys with you. 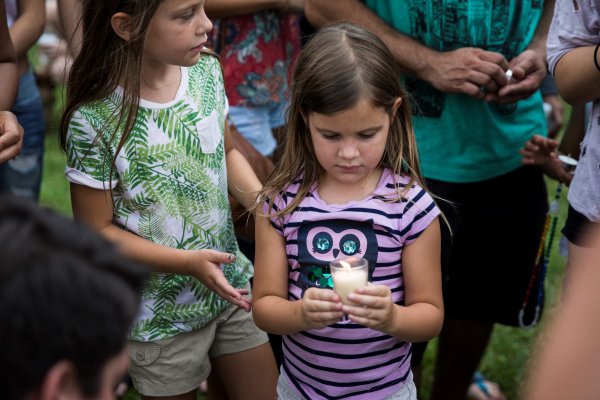 How to Talk to Your Kids About the Orlando Shooting
Next Up: Editor's Pick