These Are the 6 Biggest Announcements Apple Made at WWDC 2016

Apple just showed the world what’s next for the company’s core products during its annual Worldwide Developers Conference keynote. As usual, the Cupertino, Calif. firm previewed forthcoming updates to the software running on iPhones, Macs, and other devices. Less usual, this year marked an important step for Apple, as it revealed that it will let developers plug third-party apps into a handful of its products and services.

Here’s a look at the most important announcements Apple made June 13 during the WWDC keynote.

Apple’s iOS 10 update, which lands on iPhone and iPads this fall, is among its largest software revamps yet. Nearly every aspect of Apple’s mobile software, from the way 3D Touch works to the look and feel of Apple’s native apps, is getting an update.

Some of the most important highlights include Siri’s ability to work with third-party apps, the new features coming to iMessage (which include interacting with apps through Messages and tapping a word to replace it with an emoji), and an upgrade to the Photos app that uses artificial intelligence to recognize people, places, and things.

Siri, Apple’s four-year-old voice-activated assistant, is about to become much smarter. Rather than just serving up answers to questions and reminders, the new Siri will be able to communicate with apps on users’ behalf. This means Apple device users will be able to call an Uber or send a message through WeChat just by asking Siri. It’s a crucial move as competitors like Amazon and Google are making similar advancements with their own respective virtual assistants.

Siri is also coming to the desktop for the first time, where it will be able to do things like fetch files based on when you last opened them or what they’re titled.

As it has done in years past, Apple is launching a new software update for the Mac this fall, which will include the integration of Siri. The new software, which Apple has re-branded as macOS in line with its watchOS and tvOS naming convention, will also bring support for Apple Pay transactions on websites rather than just in apps (also available in iOS 10), more ways to optimize storage space on your Mac, and the ability to copy and paste information between a Mac and an iPhone.

Among the most unexpected announcements from WWDC was the slew of updates coming to Apple’s messaging platform iMessage. The biggest enhancement, which will debut with iOS 10 in the fall, will be the capability to access apps without having to leave the Messages app. This means iMessage users will be able to do things like order food or send money straight from the app. The announcement comes after Facebook and Google have made similar announcements with their own messaging apps.

Apple is also adding new ways to send and view content that make the iMessage experience more rich, enabling it to better compete with services like Facebook Messenger. When the update launches, iMessage users will be able to change the background of a messaging thread, replace a word with an emoji just by tapping it, and sketch on images among other things.

Apple’s watchOS 3 update brings several new features to the Apple Watch, including some aimed at making the device a more capable fitness tracker. The watch’s upcoming fitness features include exercise goals tailored to wheelchair-bound users, a feature for guiding users through breathing exercises, and a panel that shows a user’s completion results alongside those of their friends.

The forthcoming Apple Watch update also claims to address a big pain point with the device so far: slow app loading times. Apple Watch apps will update and load data in the background so that new information appears instantly when the app is launched. Other enhancements include interface updates like the addition of the Control Panel found on the iPhone and several new watch faces.

The next software update for Apple TV will make it easier to find content and access apps. The new version of Siri for the Apple TV, for instance, will let users combine search criteria to narrow down results. When the update launches, you’ll only have to sign in and authenticate with your cable provider once rather than having to do so each time a new app that requires a cable subscription is downloaded. When you install a new app on your iPhone that’s compatible with the Apple TV, it’ll automatically appear on your TV. The company also announced that Sling TV will be available on Apple’s streaming device. 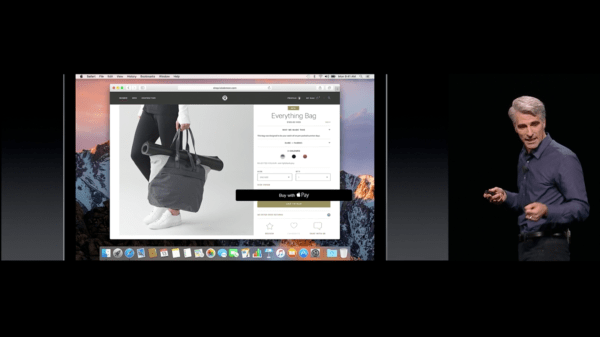 Here Are the New Features Coming to Your Mac This Fall
Next Up: Editor's Pick