Average summer temperatures in the second half of this century could regularly exceed the hottest summers in living history without efforts to curb greenhouse gas emissions, according to new research.

The study, published in the journal Climatic Change, finds an 80% chance that summers between 2061 and 2081 will be hotter than any in nearly the last 100 years if greenhouse gas emissions aren’t reduced, which means average temperatures could rise as much as 5°C (9°F). The likelihood drops to 41% if temperature rise is kept to around 2.4°C (4.3°F). Average temperatures in individual months have already risen more than 1.2°C (2.2°F).

“Extremely hot summers always pose a challenge to society,” said study author Flavio Lehner, a researcher at National Center for Atmospheric Research. “Such summers are a true test of our adaptability to rising temperatures.”

Read More: 2016 Expected to Be the Warmest Year on Record

Even if the world can cut greenhouse gases, summers will be getting hotter—potentially much hotter. Chances of record hot summers with average temperatures 7 or 8°F higher dewould remain higher than 90% on the east coast of the United States, for instance, even with a reduction in greenhouse gas emissions, according to the research. Parts of Brazil, Central Europe and China would see dramatic drops in the likelihood of record high summers with a drop in emissions.

Countries from around the globe committed to working to keep global temperatures from rising more than 2°C (3.6°F) by 2100 above pre-industrial levels in Paris last year. But in the short time since the Paris Agreement temperatures have risen dangerously close to that threshold and many experts question whether the 2°C goal is attainable. February temperatures reached 1.2°C (2.2°F) higher than the average global temperature for that month during the 20th century—the most above-average temperatures ever recorded.

“If we continue to burn fossil fuels and increase the concentration of greenhouse gases in the atmosphere, we will assume that this level of warmth will be perpetual,” Michael Mann, professor of atmospheric science at Pennsylvania State University, said at the time. “This is a reminder that we need to need to decarbonize.” 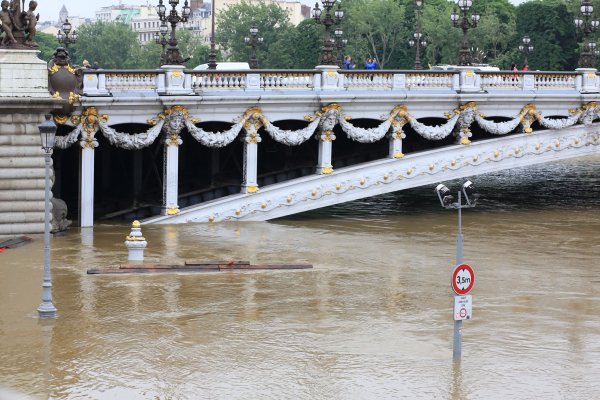 Climate Change Played a Role in Paris Floods: Report
Next Up: Editor's Pick