One day after the deadliest mass shooting in U.S. history in Orlando, Donald Trump re-upped his call for banning Muslim immigration to the U.S.

Speaking in New Hampshire, the presumptive Republican nominee framed the Orlando shooting as largely an immigration issue. “Although the pause is temporary, we must find out what is going on,” Trump said of halting Muslims entering the country. “We have to do it. It will be lifted, this ban, when as a nation we’re in a position to properly and perfectly screen these people coming into our country. They’re pouring in and we don’t know what we’re doing.”

Trump first called for banning Muslim entry to the U.S. in the wake of December’s San Bernardino shooting.

“The bottom line is that the only reason the killer was in America in the first place was because we allowed his family to come here,” Trump said of Orlando shooter Omar Mateen, who was born in New York to Afghan immigrant parents. “That is a fact, and it’s a fact we need to talk about.”

Earlier Monday, Trump insinuated that President Obama sympathized with Mateen. Mateen’s father has said he does not forgive his son, who was killed in a shootout with police after the attack.

“The Muslims have to work with us,” Trump said. “They know what is going on.”

Trump also attacked his likely general election foe, former Secretary of State Hillary Clinton. “She supports so much of what is wrong and what is wrong with the country and what is going wrong with our country and our borders,” Trump said. “She has no clue in my opinion what radical Islam is… She’s in total denial, and her continuing reluctance to ever name the enemy broadcasts weakness around the entire world.”

“She wants to take away Americans’ guns and then admit the very people who want to slaughter us,” he said. “Let them come into the country, we don’t have guns, let them in, they can have all the fun they want.”

Trump added that “Hillary Clinton can never claim to be a friend of the gay community,” as long as she supports immigration from nations that oppress homosexuality.

In a unique move for a Republican presidential nominee, he set himself up as a bigger ally to the LGBT community: “It’s a strike at the heart and soul of who we are as a nation,” Trump said of the Orlando shooter targeting a gay bar. “It’s an assault on the ability of free people to live their lives, love who they want, and express their identity. It’s an attack on the right of every single American to live in peace and safety in their country.”

Trump’s speech directly followed one by Clinton. During her talk, Clinton said “today is not a day for politics” and largely stayed away from hitting Trump, never mentioning him by name. She called for gun control, outlined plans to defeat ISIS abroad and in the U.S., and criticized Trump’s controversial proposals to ban and watch Muslims in the U.S. as “[hurting] the vast majority of Muslims who love freedom and hate terror.” 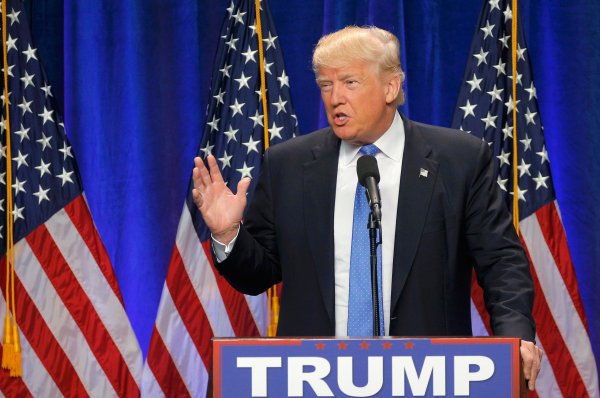 Read Trump's Speech on the Orlando Shooting
Next Up: Editor's Pick