At the beginning of the company’s highly anticipated annual developer conference on Monday, Apple CEO Tim Cook took the stage to a standing ovation, but quieted the eager crowd.

Cook, an openly gay business icon, asked the 5,000 attendees in San Francisco to pause and reflect on the deadliest shooting in U.S. history, which happened early Sunday morning at an LGBT club in Orlando, Florida.

“We offer our deepest sympathies to everyone whose lives were touched by this violence,” he said, calling the shooting a “senseless, unconscionable act of terrorism and hate aimed at dividing and destroying.”

Cook then made a point about diversity by using the crowd as an example, which contained attendees from 74 different countries. “The Apple community is made up of people from all around the world, all different backgrounds and all different points of view,” he said. “We celebrate our diversity we know it makes us stronger and moves everyone forward.”

He then asked the crowd to stand and observe a moment of silence, as the otherwise non-stop clicking of cameras paused.

The Orlando shooting has hit home in San Francisco, though it’s nearly 3,000 miles away. The city is a bastion of gay rights, a place that has been considered a safe haven for LGBT people much like gay clubs have in cities around the nation. Yet it is also a place where the LGBT community has suffered collective tragedies before, such as the shooting of openly gay lawmaker Harvey Milk. Thousands gathered Sunday evening in the Castro neighborhood for a vigil, crying, embracing and laying piles of flowers.

On Monday morning, as the thousands of developers lined up waiting to enter the auditorium for Apple’s WWDC, they did so on a city plaza right outside city hall, which was lined with rainbow flags. Elsewhere in the city, for the first time in a decade, that symbol was felled to half-mast. 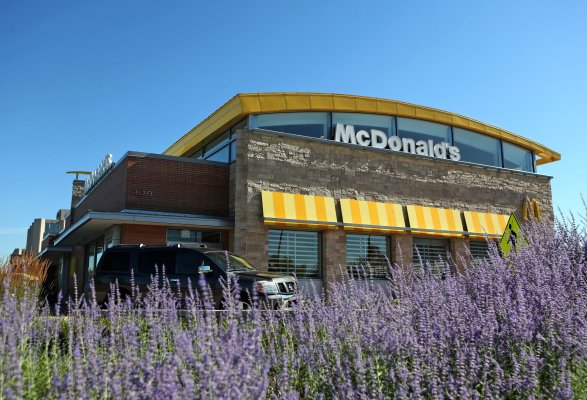 McDonald's Is Moving Back to Downtown Chicago
Next Up: Editor's Pick