Here's What People Searched for on Google After the Orlando Shooting

Mourners gather outside of the iconic New York City gay and lesbian bar the Stonewall Inn to light candles, lay flowers and grieve for those killed in Orlando on June 12, 2016.
Spencer Platt—Getty Images
By Daniel White

The world took its questions online following a deadly shooting in Orlando, making the incident the top searched shooting on Google over the last 12 months, according to data from the search giant.

Interest in the Orlando shooting began to rise early Sunday morning, just as reports of violence there began to spread online and searches continued to flood in throughout the morning, until search interest peaked around noon. Interest online in Orlando continues to remain higher than normal on Monday, with the most searched query being “shooting in Orlando.”

Searches for the Orlando shooting were higher than any other shooting in the U.S. in the last year, including attacks in San Bernardino and Colorado Springs.

A gunman, identified as Omar Mateen, took 49 lives during the incident, while more than 50 others were injured after Mateen went on a shooting rampage at a gay nightclub.

There was a rise in searches in Florida of “donate blood” on Sunday, as many in the state looked to give blood to hospitalized victims—lines were reportedly around the block for donations.

The Orlando area had the highest concentrated search interest in the country, with top questions including: “Where can I donate blood in Orlando?”, “How do I mark myself safe on Facebook?” and “What does state of emergency mean?”

The attack has become a hot-button issue in the presidential election and that reflected online as many searched to see what leading politicians had to say, with Republican presidential candidate Donald Trump being the most searched in relation to Orlando, followed by President Obama and Democrat Hillary Clinton.

Search interest in the incident rose in more than 30 countries, including those closer to home like Canada and Mexico and peaking even as far as Australia, South Africa and Singapore. 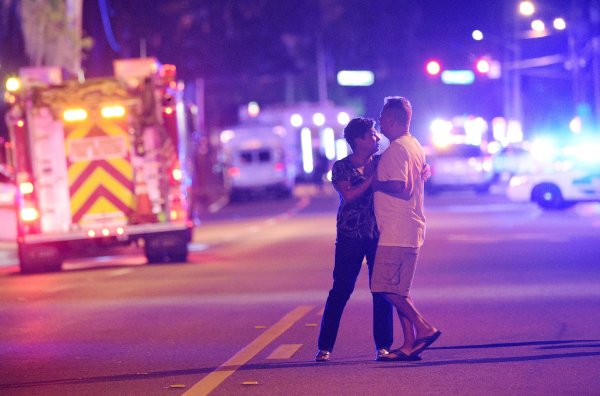 Gunfire Rings Out in This Video of the Orlando Shooting Police Raid
Next Up: Editor's Pick