What Christians Must Do in the Wake of Orlando

Vines is the author of God and the Gay Christian and the executive director of The Reformation Project, a Bible-based non-profit organization.

On Saturday, I attended my first same-sex wedding, hosted at a Christian church in the Bible Belt. As we danced and celebrated into the evening, I was struck by how much things have changed since I came out almost seven years ago. The last thing on my mind was that another group of celebrants just like us would be gunned down in another kind of sanctuary later that night, simply for being who they are.

It might seem odd to some to describe a nightclub as a sanctuary, but gay clubs have long provided a unique place of refuge, comfort and solidarity for LGBT people. That’s part of what made the news so appalling to wake up to on Sunday morning. One of the very few places carved out for us to feel safe had been violated in the worst way. And as we’re learning today, most of those who died were queer people of color, who have even fewer places of safety than white LGBT people.

It didn’t help that we were faced with the news of the slaughter on a Sunday, a day that already serves as a reminder of how unwelcome we are in most traditional sanctuaries. For the nearly 50% of LGBT Americans who are Christians, as I am, it only compounded the pain to have our faith leaders either ignore the massacre, qualify their condolences in ways they never would for other victims, or simply omit the fact that LGBT people were targeted for death because of who they are.

So in the spirit of Christian charity, but also from a place of piercing pain, I’d like to offer some advice to Christians on how to love their LGBT neighbors as themselves at this horrible time.

First, please seek not to take offense at LGBT people’s anger, even if some of it is directed toward you. While most Christians would never kill someone because of their sexual orientation, most churches have still caused deep, lasting pain in LGBT people’s lives. It is legitimate to be angry not just at the shooter, but also at all those who have caused you to feel afraid and ashamed of who you are. Unless you’ve long been a vocal advocate for LGBT people, you’ve likely contributed to that suffering—intentionally or not.

Second, please mourn with us, and please do not erase the fact that the shooter targeted people for death because they were lesbian, gay, bisexual, and transgender. Lamenting only gun violence or terrorism but not the homophobic hatred that fueled them dishonors the courage that each of the victims displayed in living their lives openly in a society where that can still be a death sentence. When Christians are beheaded by ISIS in the Middle East, it would be offensive and wrong not to say why they were murdered. The same is true when LGBT people are massacred in America. When people are targeted for who they are, you must name who they were to truly honor them.

Lastly, please avoid qualifying your lament in any way. To insist on saying that you “disagree” with same-sex marriage as part of your statement about murdered LGBT people is dehumanizing. It communicates that, even in our deaths, we are still an issue to be debated rather than people of inviolable dignity and worth. This is not an acceptable time to mention your opposition to marriage equality.

What we need to hear is this: God loves lesbian, gay, bisexual and transgender people unconditionally. You love us and are committed to making the church the sanctuary it always should have been for us. Sadly, I have never heard a pastor who opposes same-sex marriage give a sermon declaring God’s love for LGBT people without including caveats about his or her opposition to same-sex relationships.

If there were ever a time to give that sermon—and to give it with genuine humility, compassion and an openness to learn and grow—now is the time. Churches will be marked in the LGBT community for years to come by how they respond to us in this moment. Please do all you can to let that mark be one of unconditional love. 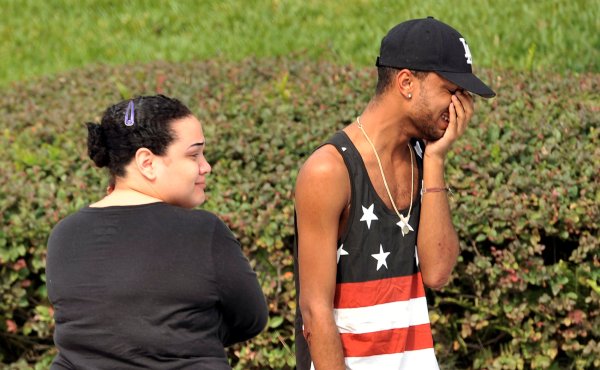 Can We Still Weep Together After Orlando?
Next Up: Editor's Pick