How Douglas MacArthur Saved the Olympics for America

When you mention Douglas MacArthur to most people, they think of the general and supreme commander from World War II and Korea, an American icon with his gold braid cap, corn cob pipe and Ray-Ban sunglasses. But as I discovered researching my new biography Douglas MacArthur: American Warrior, he was also the father of the modern American Olympic spirit. A decade before he became a wartime icon, his leadership of the 1928 Olympic Committee and work with the American team made him the Commander-in-Chief of athletic achievement in the United States:

It’s hard to remember that when MacArthur left West Point the modern Olympic Games were barely a quarter century old. A big question remained about how much time and money the United States should divert—or waste, some thought—to the Olympic effort. When the president of the U.S. Olympic Committee died suddenly, with the 1928 games in the Netherlands less than a year away, MacArthur’s name came up as a replacement. It was a natural choice. He was already famous for his advocacy of sports at West Point and amateur sports generally; the previous year he had organized a football game between the Army and the Marine Corps, in which MacArthur’s team trounced the leathernecks, much to the delight of his old chief General Charles Summerall.

MacArthur accepted the post with enthusiasm, and threw himself into the task as if he were planning a military campaign. Everything about it suited him, from meeting with coaches, giving inspiring speeches to athletes, and sponsoring committees, to planning the travel and workout schedule. He even took pleasure in contemptuously dismissing sports reporters and other naysayers who questioned his decisions, such as allowing the legendary sprinter Charley Paddock—“the World’s Fastest Human”—to play in the games even though Paddock was under investigation for accepting money, which threatened his amateur status. “We won’t stand for sniping from the rear,” he wrote in a furious telegram to critics—and that, as far as MacArthur was concerned, was that.

When the team arrived in Holland, “the outlook was not bright for our entrants,” MacArthur wrote later, “but I was determined that the United States should win at Amsterdam.” He became in effect the coach-in-chief, attending every practice he could and meeting with athletes to evaluate their performance and motivate them to a higher level. MacArthur admitted that he rode them hard: “I stormed and pleaded and cajoled.” He constantly reiterated the link between American sports and American exceptionalism. He told them that since America was the greatest nation in the world, it deserved to have the greatest Olympic team—and he meant to deliver on that proposition. “We have not come 3,000 miles just to lose gracefully,” he thundered. “We are here to win, and win decisively.”

When the U.S. boxing team’s coach threatened to withdraw the team from further competition after a blatantly unfair decision, MacArthur barked, “Americans never quit.” Some coaches and athletes grumbled at the constant badgering and micromanagement, but most, as one steeplechaser observed, admired “MacArthur’s earnest efforts and zeal.”

It paid off. By the time the games were over, the United States had won 24 gold medals, more than the next two countries, Finland and Germany, put together. The U.S. team had set no less than 17 Olympic records and seven world records. When they returned to the United States, they were feted and celebrated across the country, while MacArthur wrote up a stirring and dramatic report for President Coolidge on their performance. It began, “To portray adequately the vividness and brilliance of that great spectacle would be worthy even of the pen of Homer himself” and ended by urging that the financing of the Olympic Committee be put on a more regular basis with a $2 million endowment fund, so that more time could be devoted to training and coaching than fundraising.

“‘Athletic America’ is a telling phrase,” MacArthur wrote. “It is talismanic. It suggests health and happiness. It arouses national pride and kindles anew the national spirit…. Nothing has been more characteristic of the genius of the American people than their genius for athletics”—and the U.S. Olympic team, MacArthur believed, had to be the summing up of that national genius of a “more sturdy, more self­reliant, a more self-­helping people.”

The experience, he said, “has made me proud to be an American.” Another who was proud was his old commander Charles Summerall, who sent MacArthur a letter the day they returned to New York. “You have not only maintained the reputation that Americans do not quit,” it read, “but that Americans know how to win.”

But perhaps MacArthur’s finest hour came when they were leaving Amsterdam harbor. Two athletes who had failed to make the Olympic team but stowed away anyway to be with the team, found themselves stranded without any money and couldn’t pay for passage back to the United States. The entire team lined the ship’s rails, looking helplessly down on the hapless pair as the ship prepared to sail. Then suddenly MacArthur ambled down the gangway before it pulled away, spoke a few words to a ship’s officer, and then rushed the two men on board. “You should have heard the cheer that went up,” one of them, a University of Michigan athlete, remembered. Once the ship was well clear, MacArthur explained that he had struck a bargain with the officer to let the stowaways work off their passage with a few odd jobs around the ship.

They spent the rest of the voyage across the Atlantic on their hands and knees scraping paint.

General Summerall had told MacArthur that he showed the world once again that Americans know how to win. It was a message of optimism and hope that the public was going to need over the next five years, and none more than the U.S. Army. It was even one that would have been welcome to MacArthur himself, as a man trapped in a ruined marriage and a potentially dead-end career.

Yet the truth was that his career was finally beginning to turn around. At the age of 48 he was poised for a series of major breakthroughs as well as disappointments. A series of events would decisively shape his character and his national reputation, both for better and for worse—as well as shape the nation. The Douglas MacArthur who would become an American hero during World War Two emerged over these next years, as would the Douglas MacArthur whom Franklin D. Roosevelt would pronounce “the most dangerous man in America.” 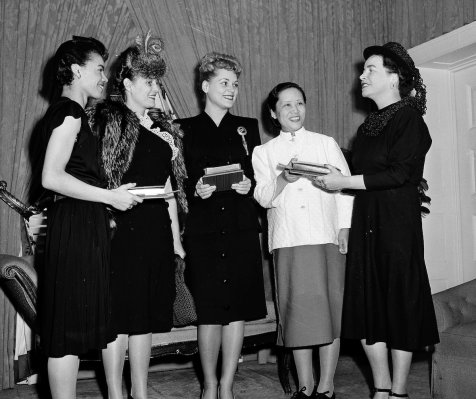 The Manhattan Project Physicist Who Fought for Equal Rights for Women
Next Up: Editor's Pick