A bill that would prevent terrorist suspects, as identified by the Federal Bureau of Investigation, from legally purchasing firearms has languished in the House for more than three years but is now receiving renewed media attention in the wake of Sunday’s terrorist attack in Orlando.

The bill, “Denying Firearms and Explosives to Dangerous Terrorists Act,” was first sponsored by Rep. Pete King, a Republican from New York, in April 2013, four months after the deadly mass shooting in Newtown, Connecticut. It was then reintroduced in February 2015 and now has 100 mostly Democratic co-sponsors.

On Monday, presumptive Democratic nominee Hillary Clinton threw her support behind the idea. “If the FBI is watching you for suspected terrorist links, you shouldn’t be able to just go buy a gun with no questions asked,” she said at an event in Cleveland. “And you shouldn’t be able to exploit loopholes and evade criminal background checks by buying online or at a gun show. At yes, if you’re too dangerous to get on a plane, you are too dangerous to buy a gun in America.”

But due to the powerful politics of the National Rifle Association and the timing of the Orlando attack—just ten legislative days before the summer recess—King says he doesn’t expect the legislation to pass anytime soon.

“I’ll push it, but it’s not going to go anywhere,” King, a member of the House Homeland Security Committee, told TIME. “I don’t want to sound defeatist, but there’s no support for it in the Republican Party. It’s just the reality.”

In December, just days after the terrorist attacks in Paris and San Bernardino, every Republican in the Senate voted against a proposal that would have given the U.S. attorney general the power to deny firearms or explosives to “known or suspected dangerous terrorists.” Forty-five Democrats voted in favor of it.

Another, Republican-backed amendment, introduced by Sen. John Cornyn of Texas, would have allowed the attorney general to temporarily prevent an FBI terrorist suspect from purchasing a weapon for up to 72 hours. The proposal required law enforcement and government officials to use that time to investigate the case and provide probable cause that the person on the watch list would misuse the weapon in the future.

The Orlando shooter, Omar Mateen, was interviewed by the FBI twice in 2013 and 2014 about his ties to terrorist groups, including passing contact with an American who died in a suicide bombing in Syria, according to the Los Angeles Times. The FBI ended its investigation of Mateen, and apparently did not include him on its formal watch list, known as the Terrorist Screening Database, because he had not yet broken any laws.

Mateen legally purchased an assault-style rifle and a semiautomatic handgun from a gun store in Florida within the past two weeks. The Bureau of Alcohol, Tobacco, Firearms and Explosives described the weapons as a “.223 caliber AR type rifle and a 9mm semiautomatic pistol.”

President Obama addressed the issue of preventing suspected terrorists from accessing weapons on June 2 in a prescient statement at a PBS town hall meeting in Elkhart, Indiana. In response to a question from a pro-gun rights activist, Obama warned that known terrorist sympathizers can legally purchase guns in the U.S., even when the FBI “knows who” they are.

“I just came from a meeting today in the Situation Room in which I’ve got people who we know have been on ISIL websites living here in the United States—U.S. citizens,” Obama said, referencing the Islamic State terrorist group. “And we’re allowed to put them on the no-fly list when it comes to airlines. But because of the National Rifle Assocaition, I cannot prohibit those people from buying a gun.”

Obama continued, “This is somebody who is a known ISIL sympathizer and if he wants to walk in to a gun store or a gun show right now [and buy] as many weapons and ammo as he can, nothing’s prohibiting him, even thought the FBI knows who he is.”

On Monday, Obama re-upped him commitment to giving law enforcement officials the power to prevent suspected terrorists from legally acquiring weapons. “The fact that we make it this challenging for law enforcement even to get alerted that somebody who they are watching has purchased a gun…and if they do get alerted sometimes its hard to stop them from getting a gun…is crazy,” he told press in the Oval Office on Monday.

“The point is that if we have self-radicalized individuals in this country then they are going to be very difficult, often times, to find ahead of time,” he said. “How easy it is for them to obtain weapons is in some cases going to make a difference in whether they are bale to carry out these kind of attacks or not…And we make it easy.”

“That’s a problem,” he continued. “It’s a problem when an angry young man on a college campus decides to shoot people because he feels disrespected…It’s certainly a problem when we have organizations like ISIL who are actively trying to promote violence over the internet.”

King told TIME that part of the reason for Republican opposition to his bill is the fear that the president, or the federal government in general, might control who is on the terrorist watch list, and therefore determine who has access to a gun, or that a law-abiding citizen might be inadvertently added to the list.

“To opponents of the bill, that’s the worst case scenario—that someone calls and reports a person wrongly, and then he can’t go out and buy a gun,” King said. To assuage that fear, King’s bill includes provisions that would allow people to challenge the categorization if they believed that they were improperly put on the watch list, King said.

Another failed amendment to King’s bill, sponsored by moderate Republicans last year, would have prevented foreigners on the terrorist watch list from legally acquiring firearms, while U.S. citizens on the list would have still been allowed to access weapons legally. That fix, however, would not have prevented Mateen, who was born in the U.S., from accessing weapons, even if he had remained on the FBI’s radar.

National polls consistently show the vast majority—80 to 90%—of Americans support criminal background checks for gun sales. A 2013 poll found that even 74% of NRA members support universal background checks, according to PolitiFact. The idea of preventing people on the FBI terrorist watch list from legally acquiring weapons is also widely popular, King said.

“It’s the hardest thing for me to explain to people in my district that this bill isn’t passing 435 to zero,” he said. “I hate to sound defeatist—I strongly support this bill and I’m certainly willing to sit down with anyone, to discuss what it takes to get it through, but I don’t see it happening.”

According to an April 2011 GAO report, people on the terrorist watch list purchased guns and explosives from licensed dealers between February 2004 and December 2010 91% of the time. “That means in less than seven years, over 1,300 individuals on the terrorist watch list succeeded in legally obtaining the guns and explosives they sought,” King wrote in a Dear Colleague letter asking for support for his bill.

Political response to the attack in Orlando has been sharply divided. Most Republican politicians, including Republican presumptive nominee Donald Trump and Florida Sen. Marco Rubio, have focused their attention on the brand of radical Islamic fundamentalism that motivates such attacks. Democratic politicians, including presumptive Democratic nominee Hillary Clinton have called for a ban on assault rifles, background checks, and other forms of gun control.

Former Sen. Larry Pressler, a Republican from South Dakota, endorsed Clinton on Sunday because of her position on gun control. “Secretary Clinton would be able to handle such explosive situations which are terrorist inspired much better than Donald Trump,” he said in a statement. “Remember that these domestic terrorists also buy automatic weapons,” he added.

Sen. Christopher Murphy of Connecticut, who has pushed for gun control in the past, said Congress must act in the wake of the Orlando attack. He did not endorse any specific piece of legislation but instead said his colleagues were “complicit in these murders” by remaining silent. “This doesn’t have to happen, but this epidemic will continue without end if Congress continues to sit on its hands and do nothing — again,” said in a statement Sunday.

King has introduced different versions of his gun control bill since 2003 with no success, and expects this time to be no different. When Congress returns in the fall, it will have to pass a budget in the looming shadow of a presidential election—a highly-politicized environment that promises to make passing controversial gun control legislation even less likely, King said.

“That’s not what they teach you in civics class,” he said, “but that’s how it works.” 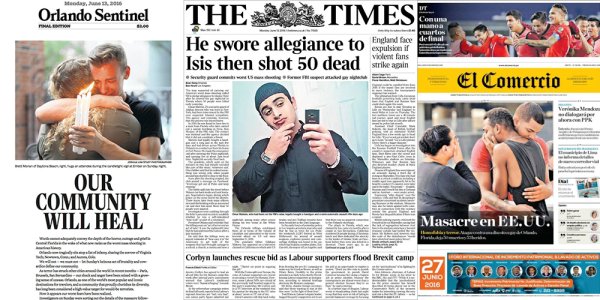 Newspapers Around the World Mark Orlando Shooting
Next Up: Editor's Pick