Mayhem and then a hail of gunfire. That is how Orlando police on Monday described how law enforcement had taken down Omar Mateen, the shooter who authorities say killed 49 people and wounded 53 at the Pulse nightclub early Sunday morning.

Mateen — who police say opened fire at the club just after 2 a.m. with steady semiautomatic fire, raking the assembled of more than 350 dancing, drinking and singing at Latin Night — had barricaded himself in a bathroom with a handful of hostages after trading fire with a uniformed off-duty officer at the club and first responders. After two hours of failed negotiation, Orlando police chief John Mina said he had no choice but to give the order to his SWAT team to breach the building, as time was running out to rescue the victims.

Most of the killing was over by the time Mateen took refuge in the bathroom, law-enforcement officials said. The dead and grievously wounded remained inside for hours, their cell phones ringing hauntingly through the air, and hospital officials cited the standoff as contributing to body count. At least 200 people fled out the club’s doors, following the message posted on the Pulse nightclub’s Facebook page minutes after 2 a.m.: “Get out and keep running” from the club.

“A number of them turned back around when they realized that their friends that they came with weren’t with them,” said David Ward, who was awoken in his nearby condo by the opening shots.

Mina said the off-duty officer engaged in a shoot-out with Mateen up until more officers arrived. Additional police officers arrived and also engaged the suspect, and “forced him to stop shooting and retreat to the bathroom where he had some hostages.”

Mateen made three phone calls to 911, FBI Director James Comey told reporters, and in one pledged his allegiance to ISIS and its leader, Abu Bakr al-Baghdadi, and invoked the Boston Marathon bombings and a Florida man who became the first U.S. suicide bomber in Syria on behalf of the Nusra Front. Hostage negotiators tried to make contact through the early morning hours. Mina said Mateen had not seemed angry or upset. “Based on the calls, he was cool and calm,” he told reporters. “He really wasn’t asking for a lot. We were doing most of the asking.”

Believing loss of life was imminent, as Mateen threatened to use explosives, Mina said he gave the order to breach. An explosive breaching device was used at about 5 a.m., but when that didn’t work, police used an armored vehicle, known as a bearcat. When officers were able to penetrate the wall, the police chief said “dozens and dozens” of people exited, including the gunman.

Officers and the gunman then engaged in a brief but intense gun battle, during which Mateen was killed and one officer was shot in his Kevlar helmet.

During a news conference on Monday, Comey revealed that the agency had interviewed Mateen on three separate occasions. Twice as part of a 2013 investigation, after the killer told co-workers at his security job that he hoped law enforcement would raid his apartment and attack his wife and child so he could martyr himself. Mateen also told his co-workers at the time that he was a member of the terror organization Hizballah, Comey said.

On another occasion in 2014, officials sought out Mateen to determine his connection to the Florida man who carried out a suicide bombing in Syria for the Nusra Front, which is linked to al-Qaeda. Officials determined that the link between Mateen and that bomber was casual — they attended the same mosque.

Comey said there are “strong indications” that the killer was radicalized and inspired by terrorist groups, but no clear indication that he was directed to carry out the attack by any organized militant group. Comey likened searches for lone-wolf attackers to “looking for needles in a nationwide haystack” and also attempting to determine which hay has the potential to become a needle. “I don’t see anything in reviewing our work that our agents should have done differently,” Comey said of his agents’ previous investigations of Mateen.

ATF agents said Monday there were two weapons recovered on the scene — a handgun and an AR-15-type rifle — and both weapons traced to the last known purchaser, who is the shooter. A third weapon was found in his car, but officers are working to trace the last known purchaser of that weapon as well. There was no other shooter, they said. The explosives Mateen threatened to detonate were apparently never there.

The police revised down the toll of victims from 50 to 49, explaining that the shooter had originally been counted among the victims. All 49 victims have been identified according to the city website.

Florida Governor Rick Scott has asked President Obama to declare an emergency in his state in the wake of the worst mass shooting in American history. The governor is hoping that resources the federal government could provide under an emergency declaration would aide in the state’s ongoing recovery. Obama and Vice President Joe Biden met with officials to discuss the ongoing situation in Orlando on Monday. “It appears that the shooter was inspired by various extremist information that was being distributed on the Internet,” Obama said after the briefing. “This is an example of the type of homegrown extremism that a lot of us have been concerned about for a long time.”

Officials said Monday that the shooting at the Pulse nightclub was the “most horrific” event in the city’s history, but Mayor Buddy Dyer said he’d never been prouder of the city. “We will not be defined by the act of the cowardly hater,” Dyer said. “We will be defined by how we respond.”

In a video posted on Facebook, Mateen’s father Sediqque Mir Mateen apologized for his son’s actions saying he hates both terrorism and ISIS.

“I always [was] telling him that … the terrorists and terrorism are the enemy of the whole humanity,” Sediqque Mir said. “I don’t know what has caused him to do this,” his father added. “I was not aware that he had hatred.” 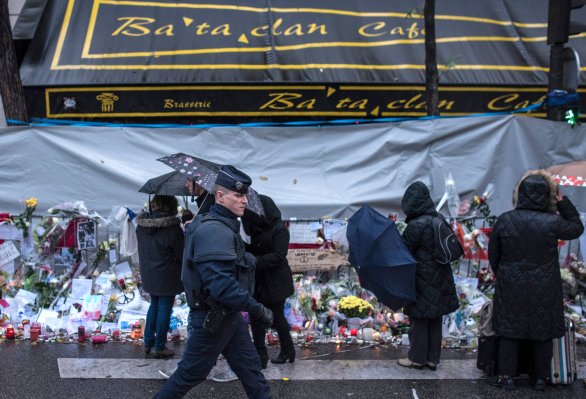 Orlando Shooting Carries Echoes of Bataclan Attack in Paris
Next Up: Editor's Pick