Bangladesh Arrests More Than 5,000 in a Crackdown on Islamic Extremism

Bangladeshi police in Dhaka escort men detained during a antimilitant crackdown across the country on June 12, 2016
AFP/Getty Images
By Rishi Iyengar

Thousands of people were arrested over the weekend in Bangladesh, as part of a sweeping crackdown by the South Asian nation’s government against increasing Islamic extremist attacks on minorities.

Authorities said they detained more than 5,000 people, of which 85 are believed to be Islamic fundamentalists, the Associated Press reported.

Nearly 20 individuals — including atheist bloggers, foreigners and priests from various minority religions — have been killed in Bangladesh in the past two years, with most of them hacked to death in broad daylight. The country witnessed four such murders in the past week alone, including two Hindus and the wife of a counterterrorism police official.

Although the Islamic State of Iraq and Greater Syria (ISIS) and al-Qaeda have claimed responsibility for most of the killings, the Bangladeshi government led by Prime Minister Sheikh Hasina continues to insist the international militant organizations have no presence in the country and attributes the attacks to local terrorist outfits linked to opposition parties. 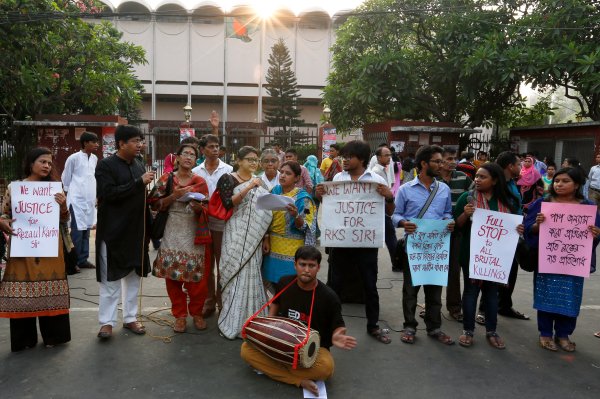 Hindu Monastery Worker Hacked to Death in Bangladesh
Next Up: Editor's Pick