As the news broke that a gunman had opened fire on a popular gay club in Orlando, killing at least 50 people in what has become the deadliest mass shooting in U.S. history, many around the world were quick and fervent with their sympathy.

In Toronto, thousands of people gathered Sunday evening to commemorate the dead. Speakers at the vigil included Canadian Premier Kathleen Wynne and Toronto Mayor John Tory. Tory also tweeted that the city’s iconic TORONTO sign would be “lit in colors of the rainbow today to honor the innocent victims in #Orlando.”

Across the Atlantic, gay media outlets in London announced that at 7 p.m. Monday night, stores and restaurants along Old Compton Street — an artery of the city’s gay neighborhood — would come briefly to a halt in solidarity with Orlando.

In Paris, people gathered for a vigil at the Place Igor Stravinsky to remember those killed and injured in the attack. A note of condolence was also displayed on the city’s electronic public message boards.

The outpouring of support was particularly loud farther away. Take Sydney, for instance, where the rainbow flag is currently flying above Town Hall — a grand facility that will be cast in pink lights Monday evening local time, according to a tweet from the city’s official account. There were gatherings elsewhere in Australia as well.

And in Auckland, New Zealand, the lights of the city’s prominent Sky Tower glowed in rainbow colors.

In Hong Kong, a vigil is planned for Monday night in the city’s central district and a minute-silence will be observed. “The LGBTI community in HKG stands in solidarity with the communities in Orlando. Our thoughts are with the victims, their families, and those who had to experience such hateful violence,” a message on the event’s Facebook page reads.

Memorials to the Orlando victims were also held across South and Central America including, Brazil, Chile and Guatemala, and in Europe and Israel as well. 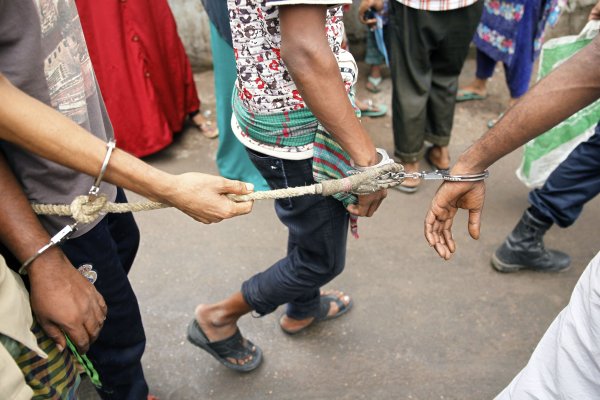 Bangladesh Arrests Over 5,000 in Crackdown on Radicals
Next Up: Editor's Pick