Hundreds Gather at Stonewall Inn in Wake of Orlando Shooting

Many in America woke up on Sunday morning to the news that, while they slept, 29-year-old Omar Mateen had entered an Orlando gay club and opened fire, killing 50 and injuring dozens more. It was the bloodiest mass shooting in U.S. history; many also saw it as a calculated attack on the LGBT community. (In a statement, the gunman’s father insisted that the attack “had nothing to do with religion,” and said that his son had grown “very angry” after witnessing two men kissing.)

On Sunday evening, members of that community in New York City gathered at the Stonewall Inn, the Greenwich Village tavern where, in the summer of 1969, a police raid precipitated a massive gay-rights protest. The Stonewall riots are a historical touchstone in the gay-liberation movement, and the bar is still a living monument of sorts — a destination for gay tourists visiting New York City, and also a place of solidarity and tribute.

Hundreds of people stood outside the tavern on Sunday. Chants led by protest organizers decried hate and demanded protection. 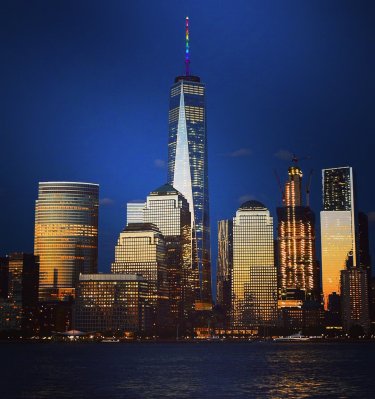 1WTC Lights Up for Orlando Victims
Next Up: Editor's Pick