Juan Rivera was inside the Pulse nightclub Saturday night, when a 29-year-old Muslim American committed the worst mass shooting in U.S. history. Rivera has been missing ever since.

Less than a day later, his still hopeful brother, Baron Serrano, took to Facebook to tell the world that he knows the deranged shooter did not represent any religion. “I want to let people know that not everyone’s the same,” he said in the video stream. “Today I met real Islam and all they do is love.”

The man holding the iPhone camera wanted the world to know the same thing. Hassan Shibly, the bearded and skull-capped executive director of the Florida chapter of the Council on American-Islamic Relations (CAIR), had rushed to Orlando on Sunday morning from his home in Tampa after learning of the shooting. He spent much of the day meeting with family members and community officials to condemn the killing of 50 and injuring of at least 53 at the LGBT nightclub. Offering hugs and prayers, he worked his way through the crowd of grieving family members awaiting word on their loved ones fates at a local hotel.

“It was just heartbreaking to stay here with the victims today and hear their stories and what they’re going through and the fear and the unknown,” he said after comforting Serrano, one of the dozens of family members told they would have to wait until Monday for news.

Just hours before he spoke, presumptive Republican nominee Donald Trump had renewed his promise to ban Muslims from entering the country, and had suggested that all Afghan Americans should be treated as suspect because of a poll that showed the nation supported Islamic law. “We can’t afford to be politically correct anymore,” he said in a statement.

Shibly has a different message. “I think what’s important is they we stand united we offer the support for the victims that we can and don’t let the terrorists divide us and turn us against each other,” he told TIME in an interview outside an Orlando Hampton Inn, where families of victims had gathered. Shibly said Sunday was not a day for politics.

“Our concern right now is just supporting the victims and their families that’s the most important thing,” he said. “We need to stand united and we have our work cut out for us to provide unity and not allow hate to divide us.”

As for the families, he said their welcoming of his presence presaged to the ultimate defeat of shooter Omar Mateen and those like him. “Overwhelming love and support and unity,” he said of his meetings. “And I think that is a message of defeat for our enemies and for the terrorists, that we will not allow enemies to turn us against each other.” 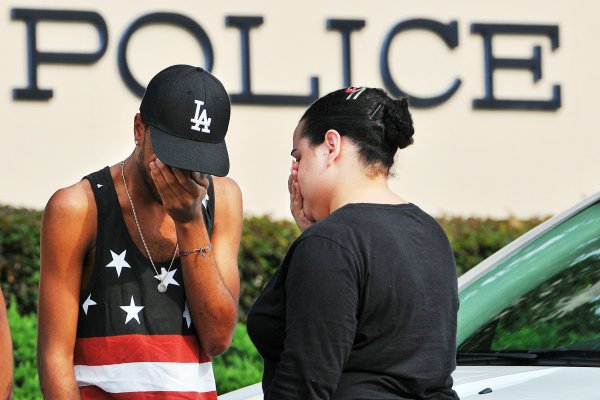 'Once People Start Screaming, You Know It's Not a Show Anymore'
Next Up: Editor's Pick