After three decades of acrobatically restrained Zelda games, Nintendo is about to upend a sacred franchise tenet: Link, the series’ elf-eared, avocado-trousered protagonist, can finally jump. Not the little leap he’ll perform automatically in older installments when you run him off a ledge, but a button-specific, bona fide vault.

There’s a justifiable game-changing reason for this, and it involves serious hang-time in what Nintendo’s dubbed The Legend of Zelda: Breath of the Wild. That’s the official name for the next-in-series fantasy roamer, due simultaneously on the company’s Wii U and forthcoming new game platform (still known solely as “NX”) next March. I’ll explain the game’s title in a moment.

But first let’s talk about climbing. Serious climbing. Rock climbing. Tree climbing. Whatever-you-can-touch-climbing. Approach any perpendicular surface, tap the jump button, and up Link goes. Ruins. Vertiginous towers. Cliff walls. Tree trunks. Escarpments you’d slide down in any other game or need a grappling hook to summit. Altaïr, Spiderman and this guy have nothing on the newfangled version of Nintendo’s iconic sword-spinner. It’s all part of the creative team’s attempt to craft an open-ended world for players to tramp through any way they like in another first for the series.

Or maybe a second, if we’re counting Shigeru Miyamoto and Takashi Tezuka’s 1986 Nintendo Entertainment System free-wandering original. As in that game, you can venture into Breath of the Wild‘s more than 100 dungeons (called “shrines”) in whatever order you like. Just don’t expect the enemies lying in wait to be homogenous pushovers. That’s part of how Nintendo’s regulating progression through the game this time: With great freedom comes the likelihood that you’ll wander into a growling goblin’s nest.

On the other hand, Nintendo says it hopes you’ll do just that, which is where the subtitle “Breath of the Wild” comes in. At a pre-E3 event, the game’s producer Eiji Aonuma explained that instead of coming up with a title based on a central story item (ocarinas, swords, caps, hourglasses) or character (Link, Majora, the eponymous twilight princess), the team wanted it to emblematize the world itself. So “wild” in the sense that Nintendo wants experimentation and surprise by way of the open, unexplored world design to be “the soul of the experience.”

That carries through the game’s visual style, inspired by a form of water color art called gouache, said Nintendo. It’s further informed by an approach to painting known as en plein air, or “open air,” where the artist attempts to replicate the moment of an experience (to give that a bit of context, impressionists like Monet and Renoir were proponents of the approach). In practice, it’s something like a hybridization of the look in the last few games, as if The Wind Waker‘s cel-shading were merged with Twilight Princess‘s quasi-realistic style.

The world, which I was able to dash and scramble around for roughly 30 minutes, feels as grand as teased in earlier sneak peeks, and the team says wherever you can see you can go “and beyond.” In the demo, we were allowed to explore a partly forested area Nintendo said represented just 1% of the total explorable world. Zoom the map out, and that world becomes a sprawl of regions grouped into valleys, jungles, mountains and—Treehouse’s Bill Trinen teased this last—possibly even the ocean. All told, Nintendo says Breath of the Wild is 12 times the size of Twilight Princess (itself no slouch in the epic fantasy world Olympics).

Jumping and free-roaming are just the start of the game’s rethinking of cherished Zelda tropes. Instead of cutting grass to conjure life-replenishing hearts, you hunt for or harvest ingredients consumable raw for minor performance boosts. Combine these in a cooking pan, by contrast, and you can craft edibles with perks in what looks to be an elaborate recipe chasing mini-game.

The weather plays a role now, too. Sudden downpours can douse fires, and brandishing a metallic object during a lightning storm may have the sort of jolting repercussions you’d imagine. There’s even a temperature gauge you’ll need to keep tabs on, donning warmer clothes to survive colder environments and vice versa.

Link’s arsenal of axes, clubs and long blades are more transient and break easily, and part of maintaining your arsenal involves stealing new ones from enemies. Enemies no longer roam at random, but occupy colonies and encampments, and they’re meant to have a sense of situational purposefulness, says Nintendo. Wait until nighttime (1 minute of realtime = 1 hour of game time) and they’ll sleep, making them easier to sneak up on, and sneaking’s also a thing: Move quickly and an audio meter bounces erratically to indicate your conspicuousness; crouch, and the meter flattens to let you know you’ve become sonically invisible.

A new and apparently intricate physics framework empowers distinctive tactics. Chop down a hillside tree (yes, Link can chop down trees) and it’ll topple, then roll downhill, clearing whatever’s in its path (or, if near a crevasse, become a bridge you can clamber across). The same for boulders, which you can shove down inclines to flatten foes. The series’ spherical bombs now come in multiple flavors, including one you can ply the environment to roll or push around like a pinball. Hop on Link’s shield and he’ll surf, Legolas-like, down mountainsides. And there’s a paraglider with which Link can soar high above areas, taking in the view to spy hidden items or suss alternate approach paths.

What’s to stop players from immediately ranging across half the map with impunity? Climb or fly without pause and a circular stamina meter gradually dwindles until Link plummets. I take that to mean there’ll be plenty of climbing and flying puzzles, where you’ll have to plot approach paths by locating and folding respite points into lengthy climbs or glides. (That, or come up with recipes for stamina-bolstering victuals.)

As promised, you can use the Wolf Link amiibo to import that character as a companion who’ll stay with Link until defeated (at which point you have to wait 24 hours of real world time to re-import him). Level up Wolf Link’s health playing Twilight Princess, and he’ll have the same number of hearts playing at Link’s side in Breath of the Wild; import him cold, and he’ll be stuck with just three (a clear prod to Wii U fans who’ve yet to buy that game bundle). Nintendo’s also making two new amiibo, one of Link holding a bow (Archer Link) and another of him on horseback (Rider Link), but the team wasn’t ready to say how they’ll function in the game.

It’s not clear what Link’s up to or who he’s ultimately squaring off with in the Zelda-verse this time, but Aonuma confirmed this version of Link has been snoozing for 100 years (he wakes and rises from a tomb-like bed at the game’s start). And when someone asked where this Zelda slots in the lore, Aonuma pointed to the t-shirt he came wearing, inscribed with a variation on the Sheikah eye symbol that’s appeared in Zelda games since Ocarina of Time. Make of that what you will, said Aonuma with a sly smile.

Towards the end of my demo, in the belly of a rune-scrawled shrine, I got my hands on one of the game’s most intriguing new items: A magnet that lets you seize and then wing large objects around. All I managed to do before the demo ended was to yank a panel off the floor (unearthing a passage) and levitate a large block (to clear my route, but it also looked like I might be able to lob it at enemies). But my sense was that it’ll be a central part of this philosophical shift to a “single puzzle, multiple solutions” motif.

Important questions remain, the most obvious being how players are going to be able to have the same experience on the Wii U and NX versions—a point confirmed by Aonuma during the presentation—if the NX is truly something “unique and different.” We’ll know soon enough, when the company unveils the Wii U’s successor later this year. 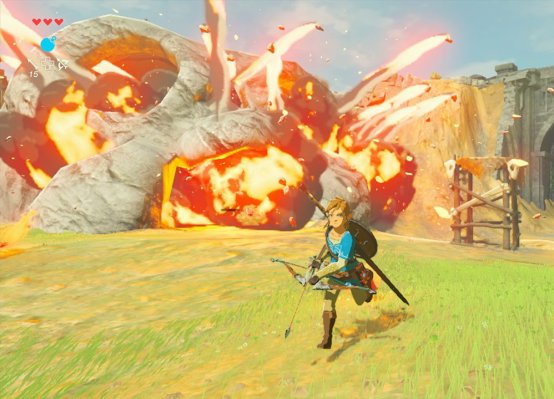 Watch the Trailer For Nintendo's Epic New Zelda Game
Next Up: Editor's Pick