Donald Trump on Sunday slammed the nation’s “weak” leaders in new comments about the deadly Orlando nightclub shooting, following backlash he received on Twitter for his initial response about the “congrats” he’s gotten for “being right” on terrorism.

The presumptive Republican presidential nominee criticized President Barack Obama for “disgracefully” refusing to say the words “radical Islam” while addressing the nation on the massacre at the popular Pulse Orlando gay nightclub that left 50 dead and another 53 wounded. Trump also called out opponent Hillary Clinton for failing to use that exact phrase.

“Last night, our nation was attacked by a radical Islamic terrorist. It was the worst terrorist attack on our soil since 9/11, and the second of its kind in 6 months. My deepest sympathy and support goes out to the victims, the wounded, and their families,” Trump said in the statement.

“If we do not get tough and smart real fast, we are not going to have a country anymore,” he added. “Because our leaders are weak, I said this was going to happen – and it is only going to get worse. I am trying to save lives and prevent the next terrorist attack. We can’t afford to be politically correct anymore.”

Clinton responded to Trump’s criticism in a statement released by her campaign on Sunday night, again calling the shooting an “act of terror.”

“Hillary Clinton has a comprehensive plan to combat ISIS at home and abroad and will be talking to the American people in the coming days about steps she would take to keep the country safe,” the statement said. “In contrast, Donald Trump put out political attacks, weak platitudes and self-congratulations. Trump has offered no real plans to keep our nation safe and no outreach to the Americans targeted, just insults and attacks.”

In his statement, Trump noted that the 29-year-old Orlando gunman, Omar Mateen, was the son of an immigrant from Afghanistan before once again invoking the idea of a ban on Muslims from entering the U.S.

“What has happened in Orlando is just the beginning. Our leadership is weak and ineffective. I called it and asked for the ban. Must be tough,” Trump wrote in a separate tweet.

Mateen was a U.S. citizen, who was born in New York before moving to Florida. He was killed in a shootout with police during the attack.

Trump’s earlier tweet that appeared to praise himself sparked a flurry of angry comments from Republicans and Democrats as well as some celebrities. “Appreciate the congrats for being right on radical Islamic terrorism, I don’t want congrats, I want toughness & vigilance. We must be smart!” he wrote at the time. 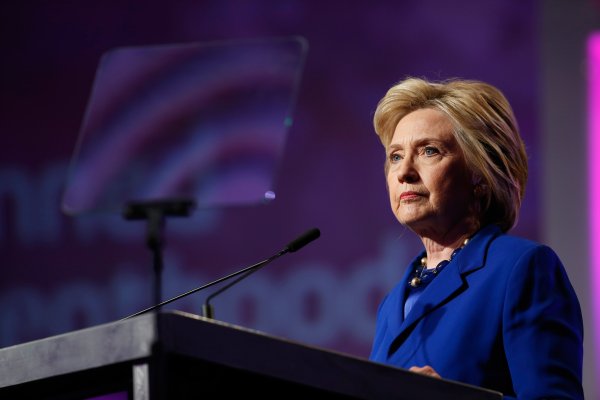 Hillary Clinton on Orlando Shooting: 'Hate Has Absolutely No Place in America'
Next Up: Editor's Pick