President Obama: Orlando Shootings Were Act of 'Terror' and 'Hate'

President Obama addressed the “horrific massacre” in Orlando from the White House on Sunday, saying his thoughts and prayers were with the families of victims.

In his short speech, the president was terse; many of the details were still unclear, but he said he knew enough to call the shooting an act of “terror” and an act of “hate.” At least 50 were killed and another 53 wounded in the shooting early Sunday morning at Pulse, a gay nightclub.

President Obama said he had wrapped a meeting with the director of the FBI James Comey shortly before taking the podium Sunday. Obama said authorities are still learning all of the facts in the case and have made no “definitive judgments” on the killer’s motivations. He did, however, note that Sunday’s mass shooting is the worst in American history.

“What is clear is that he was a person filled with hatred,” Obama said of Omar Mateen, the suspected shooter. “This could have been any one of our communities… As a country we will be there for the people of Orlando today, tomorrow, and all of the days to come.”

“This is an especially heartbreaking day for all of our friends who are lesbian, gay, bisexual and transgender,” Obama added, calling the venue “more than a nightclub,” but a place of “solidarity.”

“An attack on any American…is an attack on all of us,” Obama said. “No act of hate or terror will change who we are and the values that make us Americans.”

He added, “In the face of hate and violence we will love one another.”

In the past year alone, the president has spoken in the wake of tragedies in Charleston, South Carolina, San Bernardino, Calif., and Oregon and the president’s tone has gotten increasingly tense with each incident. After Charleston the president was reflective, singing Amazing Grace at the funeral of Emanuel A.M.E. church pastor Clementa Pinckney. After Oregon, the president showed flickers of anger during a speech in the James Brady Press Briefing Room. “As I said just a few months ago, and I said a few months before that, and I said each time we see one of these mass shootings, our thoughts and prayers are not enough,” he said. “It’s not enough.” The president’s frustration was apparent again, after the shooting in San Bernardino, Calif.

On Sunday, the president was focused. The statement was brief and to the point. The events in Orlando touched on a number of different issues—the shooting was the worst in American history and it happened at a gay club, all while people speculated about the shooter’s motives. While the president noted that the incident was a “reminder” of how easy it is for anyone to get their hands on a powerful weapon, the president didn’t dwell on the issue of gun access in his short statement—an issue that has been a thorn in his presidency. 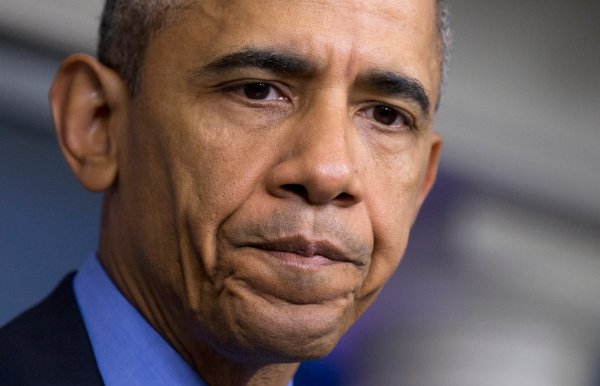