Flag Day, which takes place annually on June 14, is as oft-forgotten holiday, once called the “runty stepchild among American national holidays” in the New York Times. This year’s celebration of the holiday might go unnoticed, but its history is layered with politics and patriotism — and it’s probably not what you’d expect.

First of all, the meaning of the American Flag was a lot different when the original banner was designed in 1776. Despite all the symbolism it has acquired over the years, the flag wasn’t actually created to be a symbol of patriotism. Rather, though patriotism levels were high during the American revolution, flags were seen as articles of military equipment that were essential for identification and communication, says Marla Miller, a University of Massachusetts history professor and author of Betsy Ross and the Making of America.

“Flagmakers like Elizabeth Ross — and she was by no means the only woman making flags in Revolutionary Philadelphia — thought of themselves as suppliers of military goods,” Miller says.

So it makes sense that the idea of celebrating the flag wouldn’t have come up until much later.

“People associate our love of the flag with 1776 and the American Revolution,” explains Adam Goodheart, the author 1861: The Civil War Awakening, “when it actually has perhaps more to do with 1861 and the Civil War.”

The holiday was originally proposed in a newspaper editorial in June of 1861 by Charles Dudley Warner, an editor of the Hartford Evening Press. (He would go on to co-author The Gilded Age with Mark Twain a decade later.) Warner suggested that the stars and stripes “be recognized wherever the American flag floats.” Goodheart says it’s no coincidence that the holiday was proposed in 1861, just two months after the attack on Fort Sumter that started the Civil War.

“It was a moment when the American flag really had the biggest transformation in its history,” he says. “It went from something that was a patriotic symbol and a marker of federal territory, buildings and ships and military use, to being something that was really widely used as a beloved banner for ordinary Americans as well.”

And, as Goodheart points out, there was a commercial element too: during the Civil War, flag manufacturers were making a fortune on flags, and it’s no coincidence that the holiday was proposed in New England, the center of the textile industry. There, for the first time, various dyeing and printing techniques made it easier to mass-produce flags of all sizes. Before that period, flags were made by stitching together fields of solid fabric. Each star had to individually cut out and sewn on. By the Civil War era, however, it was possible to print the colors onto one piece of fabric. “It was really something very new,” Goodheart says, “so the holiday was driven by was commercialization, technology, politics, patriotism—all this stuff coming together and crystallizing in one historical moment.”

But, though the flag was made in 1776 and a holiday for it was proposed in 1861, it wasn’t until 1916 that Flag Day was officially recognized by Congress.

“It began like a lot of holidays, as something that was sort of sporadic, some years more celebrated and some years less, until it gradually became a national thing,” Goodheart says. “In 1916 it was widely adopted on the eve of World War I, when there was a lot of concern about socialism and anarchism and immigration. It was a moment of hyper-patriotism in America, just as 1861 had been.” 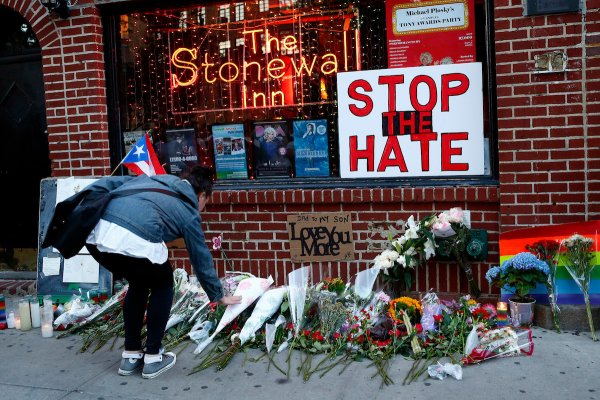 The Revolutionary Role of the Gay Bar in American History
Next Up: Editor's Pick