Set aside, for the moment, that disgust at his relentless self-congratulation, the baldfaced untruths and unceasing pettiness, and ask the question: What would the election of Donald Trump mean for the fight against jihadist terrorism?

One answer might be: Who the hell knows? As on so many issues, Trump has been all posture, no policy, a master of the spitball soundbite who refuses to talk substance.

He has, of course, issued no paper on the subject. (No surprise since virtually everyone in the Republican foreign policy establishment—the worker bees who would have written such a paper— has condemned Trump’s isolationist, ally-bashing candidacy.)

His speech in the wake of the Orlando massacre was a tissue of insinuations, along the lines of his earlier hint that President Obama was somehow complicit in the attack, bizarre fearmongering (“if we don’t get tough quick, we’re not going to have a country anymore—there will be nothing left”) and downright weirdness, including the determination that terrorism is “not just a national security issue. It is a quality of life issue.”

There is nothing on his website save for a short, almost content-free passage in his April 27 foreign policy speech, which he concludes by saying of ISIS, “Their days are numbered. I won’t tell them where and I won’t tell them how. We must as, a nation, be more unpredictable. But they’re going to be gone. And soon.”

As strategy, this is Clouseau, not Clausewitz. But if Trump has evinced no real thinking about how to deal with the preeminent national security challenge of the last 15 years—and the issue that Republican voters said was their biggest concern in the primaries—he has clearly devoted plenty of effort to denigrating Muslims. By doing so, he has made real strides toward ensuring that whatever policy he comes up with, a Trump-led America will face more threats with weaker defenses.

The elements of his maximal toughness shtick are well-known: More torture (“I’d bring back a hell of a lot worse than waterboarding”), killing the families of terrorists, a national registry of Muslims and a ban on Muslim immigration. He reminded us all of his unabashed antipathy shortly before the Orlando killings when he told CBS’s John Dickerson that a Muslim jurist would likely be biased against him much as he has alleged Judge Gonzalo Curiel, an American of Mexican heritage, is.

If one can get past the racism and blatant disregard for the Constitution, the remarkable thing is how flabbergastingly ignorant Trump is about contemporary terrorism and counterterrorism.

Consider his headline proposal of prohibiting Muslims from entering the country, which he resurrected for the centerpiece of his post-Orlando peroration. From a counterterrorism perspective, this would achieve essentially nothing. Virtually every terrorist attack carried out in the United States after 9/11 as well as most of those that were disrupted before execution was committed by American citizens or Green Card holders who had been in the country for a decade or more. Tashfeen Malik, one of the two San Bernardino shooters, was a rare exception having come to the US in 2014. But her husband Syed Rizwan Farook, Fort Hood shooter Nidal Hassan, Boston Marathon bombers Dzhokar and Tamerlan Tsarnaev, and, of course Omar Mateen, are the norm: individuals who lived here and, for the most part, radicalized here.

“We cannot continue to allow thousands upon thousands of people to pour into our country, many of whom have the same thought process as this savage killer,” Trump declared on Monday in Manchester. But his certainty that bad actors are flooding the US to carry out terrorist attacks also doesn’t hold up. Despite a close call with Umar Farouk Abdulmutallab, the underwear bomber, almost eight years ago on Christmas Day 2009, US intelligence and border security have been pretty effective at keeping militants out.

What’s more, Trump’s ban is delusory. If we apply the ban, as he said Monday, to “areas of the world when there is a proven history of terrorism” does that mean keeping out all the French and the Belgians? Or, if only those with Muslim names—since religion isn’t noted in European passports—then would Belgian suicide bomber Muriel Degauque slip through? How about Jamaican-born convert Germaine Lindsay, one of the London 2005 bombers? Trump’s big idea—much like his national registry—would do little but convince Muslim Americans all that they are pariahs in their own country.

The consequences of that alienation have been much discussed: We would all be less safe. After so many threats to their civil liberties, America Muslims will be unlikely to trust a Trump administration and come forward with the tips that FBI Director James Comey has said are “Critical to our finding those people who are radicalizing in their homes.” And while many of the people who we most need to trust US law enforcement would become unwilling to do so, for plenty of others here and abroad, the jihadist claim that the US is at war with Islam would be amply proven. Some of them would turn to violence.

As we face those newly radicalized terrorists who are taking aim at Americans around the world, how good will our defenses be? Surely one of the most mindblowing aspects of Trump is his unselfconsciousness, and this is a powerful example. In his April speech, Trump proclaimed that “we’re going to be working very closely with our allies in the Muslim world, all of which are at risk from radical Islamic violence.”

Really? The US will be working with political leaders who—along with their people—are Muslims? Appearing on CNN in March, Trump declared that “I think Islam hates us.” Distinguishing between extremists and moderates, he added, was well nigh impossible, because it’s “very hard to define. It’s very hard to separate. Because you don’t know who’s who.” When he called for the immigration ban in December, he explained that there was a “sickness” in Islam. Speaking on Fox, he asserted, ”They’re sick people. There’s sickness going on,” confiding, “There’s a group of people that’s very sick, and we have to figure out the answer.”

It is breathtaking. One of the real achievements of the post-9/11 period is the establishment of a genuinely global network of partners who are fighting jihadist terrorism. This network has no name because so much of its work—though not all—goes on between intelligence services, which abhor publicity. It includes Western and Muslim countries, including some, like Saudi Arabia, that may infuriate us with their citizens’ support for extremist clerics and institutions, but whose spies give us life-saving tips.

Michael V. Hayden, the former CIA director writes of this constellation of partners in his recent book Playing to the Edge: American Intelligence in the Age of Terror, “We trade off each other for mutual benefit, even when there isn’t much agreement at the policy level between governments… In fact, these partnerships are remarkably durable, operating below the surface, even when political relations are stormy.”

In light of what Donald Trump has said about Muslims and their faith, it is an interesting question just how durable these partnerships will be. Which Muslim leader will want to be seen working closely with him? It is certainly tough to envision any one of them meeting with him. (On the slim chance some Gulf monarch were willing to do so, would he first have to apply for a waiver of the immigration ban to visit Washington?) Perhaps some will hold their noses to keep the intelligence cooperation going. But if Trump thinks he can disparage Islam as consistently as he has and maintain the relationships that matter, then Trump really knows nothing about how the world works or how international security is maintained. If he is elected, the damage that will be done is hard to fathom. 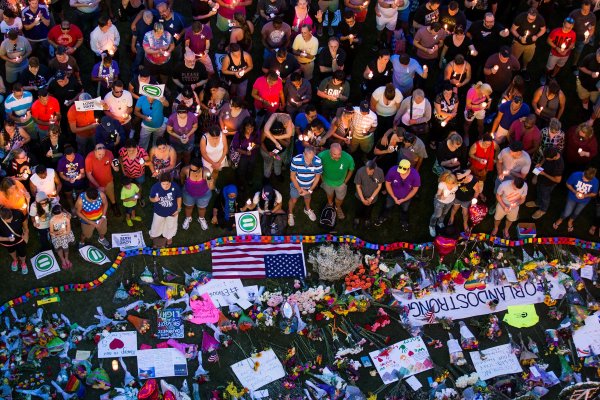 Orlando Is Not Newtown Is Not Charleston Is Not San Bernardino
Next Up: Editor's Pick