Displaced people sit in front of a tent in a camp near the Iraqi town of Makhmour, in northern Iraq, May 13, 2016. According to the U.N., at least 3.4 million people have been displaced in Iraq since January 2014.
Yuri Kozyrev—Noor for TIME
By Jared Malsin/Debaga Camp, Iraq

The chemical engineer escaped on a moonless night, fleeing from ISIS-held territory. As he crossed the front line, ISIS sentries shot at him. When he reached the other side, Iraqi soldiers also fired in his direction again—before allowing him to cross to safety.

Like hundreds of thousands of other civilians in Iraq, the engineer had been trapped by ISIS militants, unable to the leave the small town where he lived in the countryside south of the city of Mosul. Two years after ISIS seized vast sections of Iraqi territory, the military operations to dislodge ISIS from Iraq’s cities are unfolding at a slow pace, hampered by political gridlock and constrained by the Iraqi army’s thin ranks. The quagmire leaves ordinary Iraqis still living in ISIS-occupied areas at an agonizing crossroads: either stay under the suffocating rule of the extremists, or risk a potentially lethal crossing to territory held by the central government or northern Iraq’s Kurdish administration.

Those who remain in ISIS-held territory face a bleak present and a worse future. At the Debaga Camp for displaced people near the northern Iraqi town of Makhmour, single men and families who recently left ISIS-controlled villages south of Mosul described a world where most ordinary social life ceased to exist and the economy had come to a standstill. They said the jihadists banned cafes, smoking, cellphones and satellite television. Without jobs and denied ordinary sources of entertainment, residents struggled to find something to fill the empty hours—without falling afoul of the jihadists.

“We have no jobs, no work, no companies. You have to sit at home,” says Ayman, the chemical engineer. (His name has been changed, and certain details of his story have been withheld in order to protect his family from reprisal.) “If you want to go out you have to have a big beard and short trousers. Women should be totally covered in black.” The punishment for an infraction of any of these rules, he went on, could range from a fine to a beating, or worse.

Men sit and lay down in a tent at a camp for displaced families near the Iraqi town of Makhmour, in northern Iraq, May 13, 2016.
Yuri Kozyrev—Noor for TIME

Ayman hails from a small town south of Mosul, not far from the oil town of Qayyarah, which is also home to an air base that was seized and then used by the U.S. military following the 2003 invasion. The base and the town were seized by ISIS in the summer of 2014. Ayman had planned his escape for months, ultimately leaving behind his wife and young children in hopes of raising the money to smuggle his family out to join him. He had actually escaped once before, reaching Turkey in 2014, a few months after ISIS arrived. He found an apartment in Istanbul and then returned to Iraq, planning to take his family out of the country. But ISIS tightened restrictions on civilians under their control, blocking his exit from the country. Ayman was trapped, along with his family and neighbors, under the jihadists’ infant experiment in fundamentalist rule.

Read More: How a Victory Over ISIS in Fallujah Could Actually Hurt Iraq

In March, the Iraqi army launched an operation to reclaim villages south of Mosul, in preparation for an eventual attack on the city itself, one of the largest in Iraq and a key strategic goal in the broader battle against ISIS. The military succeeded in retaking some villages. But as a result of the fighting, thousands of civilians have been forced to flee. The United Nations said in April that as many as 30,000 people could soon be displaced by instability in the area. Thousands of others are fleeing amid a separate battle to reclaim the city of Fallujah, west of Baghdad. Those who successfully escape join more than 3.4 million people already displaced throughout the country.

After ISIS fighters arrived in Mosul and the surrounding area in June 2014, they set about transforming the region to fit their medieval style of governance, dismantling cell phone towers and confiscating satellite dishes. Ayman said his house was located close enough to the Kurdish regional capital that he and his family could still get a faint cell signal. They’d climb on the roof for surreptitious conversations. “If somebody hears a sound, they will come to your home and come looking for the mobile and maybe you’ll get killed, or maybe not,” he says. “That depends on the guy looking for your cell phone.” He said he also resisted the ban on satellite dishes, hiding a dish on his roof after handing another one over to the ISIS authorities, along with the wiring and the remote control.

Several types of ISIS cadres began appearing in the streets. Security men wore black, while officers policing personal behavior were garbed in white. Others wore military-style uniforms. “Just like the Iraqi army, except with a big beard and long hair,” says Ayman. The troops manning the checkpoints were usually Iraqi recruits of ISIS, he said, but there were also foreigners. “I heard people talking French. I heard people talking English—American. I know the American accent,” he says.

Displaced people stand in front of a fence in a camp near the Iraqi town of Makhmour, in northern Iraq, May 13, 2016. The United Nations said in April that as many as 30,000 people could be forced to flee instability in the Makhmour area, as the Iraqi military pursues an offensive against Islamic State militants in the district.
Yuri Kozyrev—Noor for TIME

Under ISIS, the economic and social life of the town began to die out. Struggling under banking and other sanctions levied against ISIS, a reduction in oil revenues, inflation and the flight of the population even despite ISIS’ restrictions, the economy began to crumble in ISIS’ self-proclaimed caliphate. Ayman worked for a large company that shuttered its operations in the area after ISIS took control?. Without work, he found himself staying at home with his family. He kept his daughter out of school, refusing to send her to an institution that had been taken over by fundamentalists. To pass the time, they’d visit relatives and neighbors, sit and drink tea, or take walks. For ordinary civilians, one of the unexpected results of jihadist rule was unimaginable tedium.

“Everything is depressed there. Everything,” says Mohamed Mahmoud Ali, 54, who is also a shopkeeper from the village of Sidera. “We don’t have food. The refrigerators are empty.” After ISIS took over the town in 2014, Ali closed his corner shop, and relied on money loaned or gifted by relatives. Like Ayman, Ali had recently fled, and was waiting in a processing center in a large white tent at Debaga Camp, in the stifling late spring heat. The new arrivals have to wait, essentially detained in the tent while intelligence officials vet them, fearing that ISIS could be sending infiltrators among the displaced civilians.

Others fleeing ISIS-held areas described a depression that seemed to blanket the region. Out of fear or despair, some people simply stayed home. “You can ask my wife. We started to annoy each other,” says Abdullah Eissa, a shopkeeper in his late fifties, another new arrival at Debaga Camp. He sat in an adjacent tent on a mattress with more than a dozen members of his family around him, swatting flies in the heat. Restless children squirmed on the floor around them.

Ayman’s own family remain in ISIS-controlled territory. He had told his family he planned to leave, but refused to tell them the exact date, a measure taken to preserve the secrecy of the plan. He moved them to a different house, fearing for their safety. It was the only way, he told them. His plan is to return to work with his company, earning enough money to hire a smuggler to help them flee safely. Since he escaped, he managed to call his young daughter, who cried as they spoke. “They are worried about it,” Ayman says, “but we have no choice.” 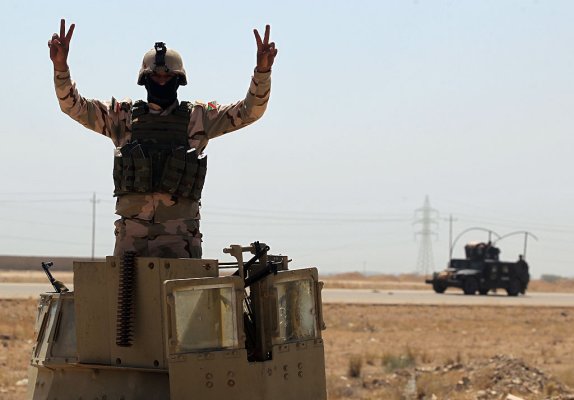 These 5 Facts Explain the Good—and the Bad—About Iraq Today
Next Up: Editor's Pick