Bernie Sanders said Tuesday that he will do whatever he can to help defeat Donald Trump in the general election, signaling that he is prepared to reconcile with his opponent and adopted Democratic Party—but that he is not yet ready concede to Hillary Clinton.

The Vermont Senator spoke to reporters on the White House lawn shortly after an extensive meeting with President Obama about how to unify the party in the wake of a combative primary.

“I am going to do everything in my power and I will work as hard as I can to make sure that Donald Trump does not become president of the United States,” Sanders said, with his wife, Jane, at his side.

Sanders insisted, however, that he would continue his campaign and compete in the Washington, D.C. primary next week. “Our campaign has been about building a movement, which brings working people and young people in to the political process to create a government which represents all of us and not just a handful of wealthy campaign contributors,” Sanders said. “We will continue doing everything that we can to oppose the drift which currently exists toward an oligarchic form of society, where a handful of billionaires exercise enormous power over our political, economic and media life.”

Clinton and the Sanders campaign have been in open contact in the last few days, with the two candidates speaking on the phone on Tuesday night. Sanders said they had a productive conversation and that they plan on meeting in the future to figure out a plan to defeat Trump. Clinton has already secured enough delegates to win the Democratic nomination.

“I spoke briefly to Secretary Clinton on Tuesday night,” Sanders said. “I congratulated her on her very strong campaign. I look forward to meeting with her in the near future to see how we can work together to defeat Donald Trump and create a government that represents all of us, and not just the 1%.”

Obama and Sanders met to discuss the future of the party and the movement that Sanders has begun. Afterward, Sanders also thanked Obama for not weighing in on the race or endorsing Clinton earlier in the primary. Obama is is expected to formally back Clinton soon.

“They said at the beginning that they would not put their thumb on the scale, they kept their word and I appreciate that very much,” Sanders said.

-With reporting by Maya Rhodan 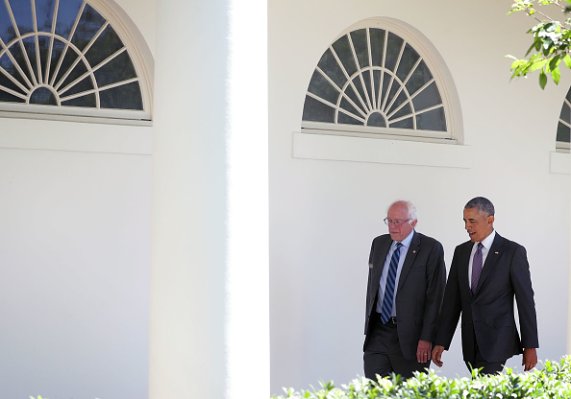