President Obama is making clear that he, too, is with her.

Presumptive Democratic nominee Hillary Clinton’s campaign shared a video on social media on Thursday announcing that the President was endorsing his onetime rival and former Secretary of State.

“I don’t think there’s ever been someone so qualified to hold this office,” Obama says in the video. “I want to congratulate Hillary Clinton on making history as the presumptive Democratic nominee for President of the United States.”

“I want those of you have been with me to be the beginning of this incredible journey to be the first to know that I’m with her,” Obama added in a rollout that was spread across Clinton’s social media footprint. He is the biggest name yet to join the social movement declaring the #imwithher. “I am fired up, I cannot wait to get out there and campaign for Hillary.”

Read More: Why Presidents Wait to Endorse Their Successors

The announcement came just after Obama met with Clinton’s Democratic rival Bernie Sanders, who has mathematically lost the nomination but not his spark. Sanders has so far refused to yield to Clinton, who made history on Tuesday by becoming the first woman to lead a major party ticket.

Presidents typically endorse their party’s nominee, and his backing of Clinton has long been expected. Clinton served as his Secretary of State during his first term, and the two have developed a deep friendship and mutual respect. Obama has been telling allies that he looks forward to campaigning for her in the fall, and many of his former aides are already at work on her campaign in Brooklyn. The pair will appear at a campaign event next week in Green Bay, Wis.

Thursday’s endorsement matters in that it cements his allegiance—and further signals that top Democrats think it is time for Sanders to abandon his campaign.

Presumptive Republican nominee Donald Trump chimed in on Twitter to criticize the endorsement.

And Clinton responded in kind.

White House Press Secretary Josh Earnest responded to a question about Trump’s tweet at the press briefing on Thursday. Earnest said that he was not “not surprised” by the fact that the presumptive Republican nominee tweeted. Earnest refuted Trump’s argument, saying the President and his former Secretary of State do not agree on everything.

“They do not have the same opinion on every issue,” Earnest said. In the video, he noted, “the president says he does not believe that there has been someone more qualified, a candidate more qualified, to hold this office. “ 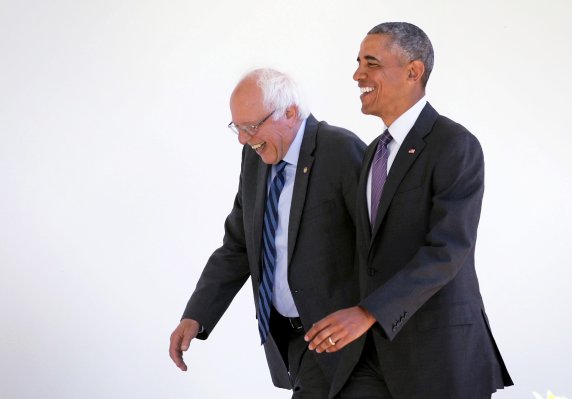 Sanders Signals at Reconciliation After Meeting Obama, But Doesn't Back Clinton
EDIT POST