This Is What 'Adulting' Means

English speakers love to turn nouns into verbs. There was rain before it rained. There was Google before we googled. And there were adults before we adulted.

The latter has exploded onto the Internet in the past year. In fact, the American Dialect Society—the organization that basically invented choosing a “word of the year”—nominated the verb adult as last year’s most creative construction in their most recent vote a few months ago. And in the most recent issue, the linguistics journal American Speech has offered up these definitions:

1. to behave in an adult manner; engage in activities associated with adulthood

2. to make someone behave like an adult; turn someone into an adult

The linguists who wrote the piece also noted that this noun that has been turned into a verb has been turned back into a noun, in the form of an activity known as adulting—which operates in a sentence much like its cousin “parenting” does. They also traced the currently hot usage (Defintion #1) back as far as a tweet from 2008.

But while a definition is a satisfying thing to have sorted out, it doesn’t tell the whole story. For instance, it doesn’t explain the context in which one might want to use the word or why searches for the term have done this.

According to Jane Solomon, a lexicographer at Dictionary.com and one of the article’s authors, a big factor is millennials and their “delayed development” (which isn’t necessarily as unfortunate as it sounds).

“This generation of millennials,” she says, “they go through life stages that other generations have gone through much later in life, like starting families, owning homes. Maybe they won’t own homes at all.” The age of first-time mothers is indeed at a historic high of 26. Real-estate site Zillow found that first-time home-buyers are more likely to be older and single today than in past decades. We’ve all heard about millennials’ boomeranging.

And so this jokey way of describing one’s engagement in adult behaviors—whether that is doing your own taxes, buying your first lawn mower, staying in on a Friday, being someone’s boss or getting super pumped about home appliances—can help those millennials acknowledge and/or make fun of and/or come to grips with that transition (or how late they are to it).

This is, after all, a transition their friends may not be going through yet or one that might seem to herald that certain end to their fading youth. To say you are “adulting” is to, on some level, create distance between you and what are implied to be actual adults who are adulting 100% of the time and therefore have little reason to acknowledge it. Or if they do, they might instead use phrases like “going about my normal day.”

Depending on the person and their listeners, different motivations may be driving the “adulting” utterance. It may be the speaker’s insecurity at so rarely finding themselves in an adult posture well into their 30s. Or it may be their wish to imply that they’re still so young and hip that it is laughable for them to be, say, ironing the serviettes before a dinner party. Or it may be their fear that their peers will find the fact that they spent a lot of time making a Thanksgiving centerpiece kind of lame, so they use the term to make fun of themselves when they Instagram it. #adulting

Or perhaps the speaker is the only one in the friend group who is 25 and has a house and spouse and kid and uses the term to spare the feelings of fellow diners who, they happen to know, wish they could also be in that position, a sort of implied “No, no, you’re the normal one. I’m the one acting much older than my age,” even though they’re doing those things even later than their own parents did.

Or maybe it’s some completely different context because English words have a fantastic habit of defying being pinned-down.

While some find the phrase cute and cuddly, others do not. Jezebel writer Madeleine Davies believes there is a “self-congratulatory” vein to this, an expectation of millennials to be applauded for “fulfilling your basic responsibilities as a human,” which she finds to be “pretty much the most childish thing imaginable.” And at least one person, Kelly Williams Brown, appears to be making a living off the term. She turned her popular blog on adulting into a book that sympathetically (and comically) offers to help millennial-types cope with things like “Accepting non-Special-Snowflake-ness.”

Also in the sympathetic camp is linguist and author Ben Zimmer, another mind behind the American Speech article. Adulting tends to be used by those “who find themselves doing adult things for the first time and feeling like an adult,” he says. “It is very much attached to people coming of age, where they’re thrust into having to take things more seriously.” Every generation, he adds, “comes to grip with aging in their own way.” 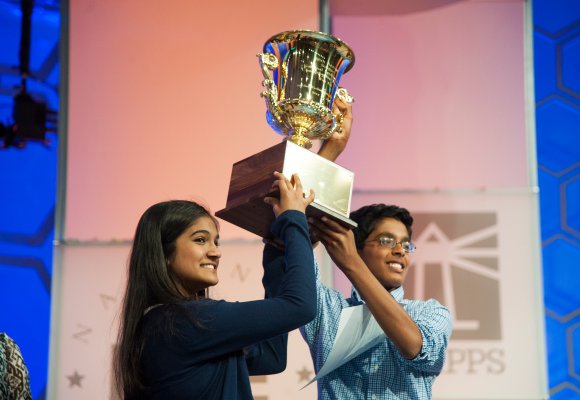 Quiz: Could You Be a National Spelling Bee Champion?
Next Up: Editor's Pick