Donald Trump took to the lectern with his family in his opulent Trump National Golf Club Westchester as Queen’s anthem “We Are the Champions” blared from the speakers. But the candidate was notably chastened. “I understand the responsibility of carrying the mantle, and I will never, ever let you down,” Trump said. “I will make you proud of our party and our movement.”

He spoke before a crowd of club members and a crush of television cameras on the night of the final GOP primary, subdued in the face of the harshest week of press coverage of his yearlong political career. With national Republicans feeling buyer’s remorse and threatening to abandon his nascent candidacy, Trump was under pressure to assuage the concerns of his party. The unconventional presumptive GOP nominee delivered a most conventional stump speech to prove he was up to the task of taking on newly crowned presumptive Democratic nominee Hillary Clinton.

“I understand the responsibility of carrying the mantle, and I will never, ever let you down,” Trump said. “I will make you proud of our party and our movement.”

Audience members seemed surprised by Trump’s subdued tone, attempting to interrupt him with call-and-response and cheers as is common at his rallies, but Trump largely brushed them off as he tried to maintain a sober image for the cameras.

It is hardly Trump’s first pivot to attempting to appear more presidential, as the candidate and his team have been embroiled in a high-stakes debate over whether he needs to adjust his tone for the general election. “I’m not changing,” he declared just days ago.

But in the face of withering criticism it became clear to Trump that he needed to do just that — at least for the evening.

Highlighting the critical nature of the speech, Trump spoke with the aid of a pair of teleprompters, which were personally inspected by campaign chairman Paul Manafort before his remarks. Manafort has been the leading proponent within Trump’s campaign for the candidate to moderate his tone and to expand his appeal by appearing more presidential. (Trump has previously mocked other politicians for using teleprompters on the campaign trail and has called for them to be banned.)

Trump made a direct appeal to supporters of vanquished Democrat Bernie Sanders, who he said failed in a “rigged” system that benefited Clinton. “We welcome you with open arms,” Trump said.

Gone was the mocking tone Trump has adopted over the past year toward his rivals and their supporters. “To everyone who voted for me throughout this campaign, I want to thank you very much,” Trump said. “To those who voted for someone else in either party, I will work hard to earn your support.”

The roots of the current Trump crisis stemmed from an attack on U.S. District Court Judge Gonzalo Curiel, who is hearing the ongoing civil suit over the failed Trump University, called a scam by several attorneys general. Trump said the Indiana-born judge of Mexican heritage should be disqualified from hearing the suit because of the candidate’s plans to build a wall on the Mexican border.

Speaker of the House Paul Ryan, who endorsed Trump last week after a weeks-long courtship, blasted Trump’s remark as “the textbook definition of a racist comment.” Illinois Senator Mark Kirk revoked his endorsement of Trump over the comment, South Carolina Senator Lindsey Graham called on his colleagues to rethink their support of the party’s nominee, and Maine Senator Susan Collins left open the possibility of voting for Clinton. And while Trump’s comments may give some Republicans hope that the bombastic front runner can change his tune, many are worrying how long he can keep it up.

Trump, who frequently boasts of himself as a “counter-puncher” instead absorbed the blows, issuing a statement that was as close as he has come to an apology this cycle. “It is unfortunate that my comments have been misconstrued as a categorical attack against people of Mexican heritage,” a statement from Trump read Tuesday.

His remarks Tuesday evening included an attack on Clinton, but lacked the conservative red meat and conspiracy theories that have defined the last several weeks of his campaign.

“We can’t solve our problems by relying on the politicians who created those problems,” Trump said, attacking the Clintons for alleged pay-for-access schemes. He also announced that he would deliver a “major address” attacking Clinton on those themes on Monday.

The political outsider then cast himself as the only agent of change in the race, in a theme designed to appeal across the political spectrum. “This election isn’t about Republican or Democrat, it’s about who runs this country, the special interests or the people,” he said. “We can’t solve our problems by relying on the politicians who created those problems.”

Trump opened his remarks in Westchester saying, “Tonight we close one chapter in history and we begin another.” His statement was an attempt to turn the page, but it remains to be seen how long he can keep reading from it. 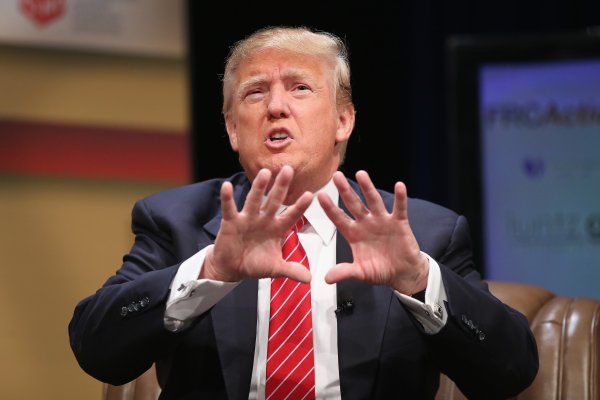 Donald Trump Says Comments About Judge Were 'Misconstrued'
Next Up: Editor's Pick