Hillary Clinton has beat Bernie Sanders in New Jersey, winning one of the final states of the Democratic primary on her way to likely winning a majority of pledged delegates Tuesday night.

Her victory in New Jersey comes a day after she clinched the nomination by exceeding 2,383 delegates, according to a count by the Associated Press that includes superdelegates, or the party’s elites, who are not bound by the popular vote.

Results are still expected on Tuesday night from California, New Mexico, South Dakota, North Dakota and Montana, where a total of nearly 700 delegates are at stake. By the end of the night, Clinton is almost certain to win a large majority of the total pledged delegates at stake in the Democratic primary, despite a hard-fought primary with Sanders.

Clinton will celebrate in Brooklyn with her supporters where she is expected to give a victory speech if she wins a majority of pledged delegates. A campaign official said she will feature her role as a trailblazer—becoming the first woman nominee of a major political party—prominently in the celebration.

Sanders has said he will bring his fight to the Democratic convention and contest Clinton’s delegate lead, asking superdelegates to support his candidacy.

Most Popular on TIME
1
Melania Trump's Christmas Decorations Gave the Internet the Most Wonderful Memes of the Year
2
Who Should Be TIME’s Person of the Year for 2020? Vote Now
3
No Safe Havens in COVID-19's Final Assault 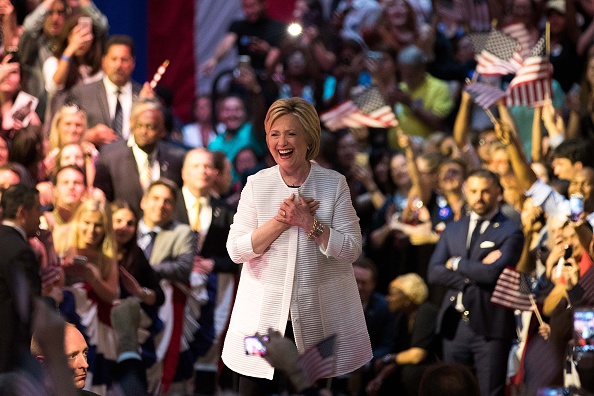 Hillary Clinton Nods to History as She Seeks to Make It
Next Up: Editor's Pick