Why This Republican Created a PAC to Help Elect Hillary Clinton

Hillary Clinton hadn’t even clinched the Democratic nomination when Craig Snyder, a longtime Republican, filed the paperwork to create a PAC to help get her elected.

“You have to put first things first in life, and a threat to the security and the safety of our country and our families is far more important than any disagreements we have over taxes or spending or social issues,” says Snyder in an interview. On the organization’s website, Snyder acknowledges all the ways he and other Republicans disagree with Clinton, mostly on domestic issues, and noted that those disagreements are not likely to change.

But, he maintains: “Down the road, America will have plenty of time to go back to arguing, civilly and thoughtfully, about taxes, spending, and the right balance between accommodating change and preserving tradition in family and community values,” he wrote on the site. Right now, “Donald Trump must be defeated.”

That’s a big statement coming from Snyder, a lifelong Republican with close ties to Trump allies. Snyder co-founded IKON Public Affairs with former Trump aide and longtime Clinton enemy Roger Stone, and briefly worked under Trump’s campaign chair Paul Manafort at the GOP Convention in 1996. Other longtime Republicans have also suggested they’re open to voting for Clinton, but Snyder’s PAC is the first group to attempt to actively convince other Republicans to do so.

Snyder argues that the world is scary, and even scarier with Trump at the helm. As Russia and China become increasingly militarized, and ISIS and North Korea threaten American national security, the prospect of a Trump presidency could be an epic disaster, he argues.

“There are real possibilities out there that could lead to World War III,” he says. “And you gotta ask: who should be at the desk of the commander in chief? It shouldn’t be Donald Trump.”

That’s the premise of one of the two ads created so far by Republicans for Hillary 2016, called “SAFE.” You can watch it here:

He knows he’s not going to turn the entire Republican party against Trump. All he needs, Snyder says, is a small minority, maybe 10% of Republican voters, in order to keep Trump from the White House. “If Trump ends up with 10% less than other Republican candidates, that’s a political revolution,” he said. He’s specifically looking at married Republican women who he thinks might be more scared of a Trump presidency than Republican men.

Snyder won’t disclose how many backers he has so far, but he anticipates an influx after the Convention. Right now, other Republicans view the endeavor with everything from tacit support to complete disapproval.

“The range of reactions goes from ‘Thank God someone is doing this, how can I help?’ to ‘You’re a traitor, how can you think about supporting Hillary Clinton,’” he says, adding that if the presumptive nominee were Bernie Sanders, he’d never have a shot at convincing Republicans to vote for him, because of his “declared socialism.”

Still, he says, he’s confident he’ll be able to convince at least some Republican voters to vote against their party in order to save their country. Ultimately, Snyder thinks, some traditional Republicans will see that there’s simply no other rational option for them.

“You get invited to the banquet and your choices are chicken or fish,” he says. “You can’t write in steak.” 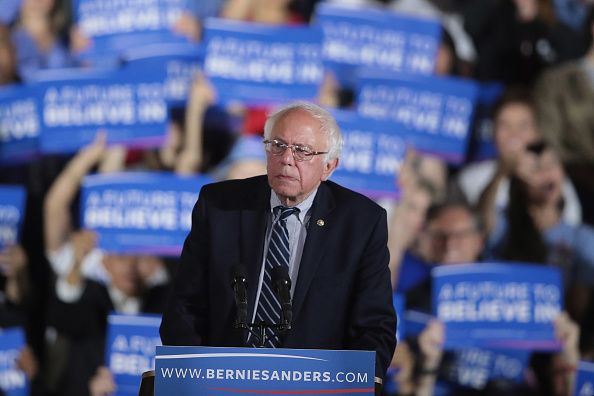 Bernie Sanders Will Alone Decide What Happens Next. Here's What He's Thinking
Next Up: Editor's Pick