While Bernie Sanders vowed on Tuesday night to continue the “very, very steep fight” for the Democratic nomination, some of his congressional supporters — recognizing Hillary Clinton’s primary victory — are instead turning their attention to how the Vermont Senator can unify and influence the party outside the nomination.

“I think it’s important for Bernie to find a way to carry on his cause, but we’re getting at that point where unity is going to be essential to beat Donald Trump, and Bernie knows that,” Vermont Rep. Peter Welch said in an interview on Wednesday. Welch, a superdelegate who was one of eight U.S. Representatives to endorse Sanders, said the “verdict is in” on the party’s nominee, but he will continue to support Sanders at the convention if he stays in the race.

Clinton won voting contests on Tuesday in New Jersey, New Mexico, South Dakota and California—the last of which came as a particular blow to Sanders, who had prioritized winning the delegate-rich state. Instead, he won contests in Montana and North Dakota.

Welch said the question now is how Sanders will continue his fight for social and economic justice without the nomination. “Going forward, Bernie’s going to be a big voice in the Democratic Party,” he said. “I think it’s really important that he stay in the process.” Welch said he trusts Sanders’ judgment in deciding whether to concede or continue on to the convention.

“There’s no question in my mind that Hillary Clinton will bring us together and lead us to victory in November,” said Minnesota Rep. Rick Nolan in a statement, calling Sanders “the drummer” who moved the party forward. “But now it’s time to unite under the banner of a progressive and inclusive platform to defeat Donald Trump and the forces that would roll back a century of progress for this nation.”

Oregon Sen. Jeff Merkley, the only U.S. Senator to endorse Sanders, has called for party unity in multiple interviews in the past couple days.

“Once a candidate has won a majority of the pledged delegates and a majority of the popular vote, which Secretary Clinton has now done, we have our nominee,” Merkley said in an interview with the Washington Post published Wednesday. “This is the moment when we need to start bringing parts of the party together so they can go into the convention with locked arms and go out of the convention unified into the general election.” Merkley said he would not support efforts to try to flip the votes of superdelegates — something the Sanders campaign said it would attempt.

“At some point, when we’re trying to flip 400 super-delegates, and it’s not gaining traction, I think you have to come to the conclusion that it’s not going to happen,” said Arizona Rep. Raúl M. Grijalva, who had also endorsed Sanders, in the same Post column. “You just move into a different direction. And that different direction is that we begin to try to integrate the party.”

Both Merkley and Grijalva said they want to see Clinton and Sanders work together.

“I’m proud that Democrats have two progressive candidates fighting for a just and tolerant America, while the Republican nominee is openly spouting racism,” Minnesota Rep. Keith Ellison, who endorsed Sanders last year, said in a statement Wednesday. “There is no question Democrats will be unified at our convention in July and defeat Donald Trump come November.”

In a Facebook post Tuesday night, Florida Rep. Alan Grayson, who endorsed Sanders earlier this year, said his “revolution” has “always been about more than any one candidate, or any one campaign.” Grayson could not be reached for further comment on Wednesday.

Other high-profile Sanders supporters praised his accomplishments on Wednesday, while moving on to congratulate Clinton.

“Congratulations @HillaryClinton & all her supporters on your Historical win. My Sanders family, let’s keep pushing our Progressive values,” actor and prominent Sanders supporter Mark Ruffalo posted on Twitter on Wednesday morning. “Chin up @BernieSanders supporters. We are doing impossible things together. We too have won historically and we are just getting started!” 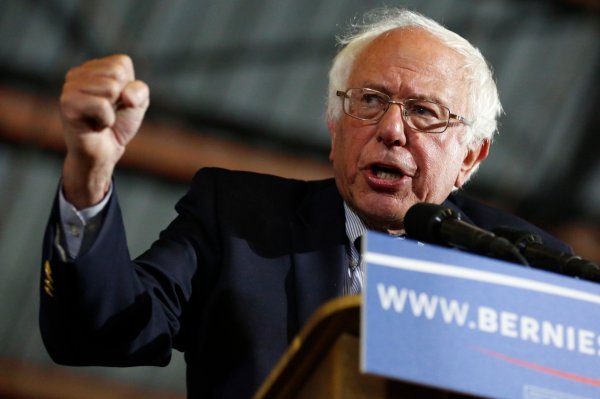