Why It’s Easy to Forget Hillary Clinton Is Making History

Hillary Clinton has become the first female to clinch the nomination of a major political party, shattering a glass ceiling she only cracked in 2008 and inching closer to gender equality that was only a dream for early women’s rights activists like Susan B. Anthony.

“It’s really emotional,” Clinton told reporters in California on Monday before the Associated Press reported that she had secured enough support to win the nomination.

But few, it seems, fully appreciate what was happening.

Clinton, a former Secretary of State, Senator and First Lady, has already been a trailblazer over four decades in public life, and her nomination has long been one of the better bets in American politics. Clinton’s boosters — and Clinton herself — made her credentials the focus of their pitch, and those watching her campaign often forgot that they were, perhaps, watching history when it came to gender. Unlike Barack Obama’s campaign in 2008, which was heralded as a potential turning point in the country’s long history of racism, few treated Clinton’s ascent to this role as a corollary on sexism.

For one, women are no longer newcomers to presidential politics. Before the rise of Obama in 2007, Clinton was a likely Democratic nominee. Younger voters remember Sarah Palin’s turn as a vice-presidential nominee in 2008, and their parents recall Geraldine Ferraro’s turn in 1984; a woman leader just seems obvious to them. Others, such as Carol Moseley Braun in 2004, Michele Bachmann in 2012 and Carly Fiorina in 2016, have made unsuccessful attempts before, and the novelty simply is not there for Clinton.

At the same time, the nation’s former top diplomat is being overshadowed by the drama of her rival Senator Bernie Sanders, who is promising to continue his fight against Clinton all the way to the convention in Philadelphia at the end of July. Clinton has won 3 million more votes, earned more pledged delegates and recruited more superdelegates — only to have Sanders’ loyal supporters insist that their mascot could still pull this off in an intra-party fight. He’s urging them on.

The AP, which has tracked delegates awarded through voting and superdelegates secured through wooing, published its tally just after 8 p.m. Monday that all but ensured the results for Tuesday’s six states were moot.

Clinton allies warn that the moment must not get lost in the maelstrom of a presidential election. “This is a monumental moment in our nation’s history and in the progressive movement,” said Marcy Stech, communications director for EMILY’s List, a group that backs female candidates who support abortion rights. “For the next couple days, we need to take a step back. Our country has never done this before.”

Sanders told the AP he disagreed with its math and said he will continue campaigning against Clinton, arguing he still has seven weeks to win over the superdelegates — the party insiders who have known Clinton for years — he needs if he is to become the party’s nominee. “Our goal is to get as many delegates as we possibly can,” Sanders told reporters on Monday as he campaigned on the eve of the California primary. So much for a graceful exit.

That finality has set in for Clinton’s allies, but not for Sanders’. “Many people have waited a long time for a woman to be major party nominee.Seems wrong to ignore historic moment bc male competitor says to,” tweeted Neera Tanden, a Clinton supporter and president of the Center for American Progress.

Polling shows that Americans are not clamoring to elect a female President based solely on her gender. While 8 in 10 Americans believe the country is “ready” for a woman President, according to a CNN poll, just 31% say it’s a very important priority. In other words, it’s cool if it happens, but it is not the most pressing qualification for the next Commander in Chief.

Younger voters believe especially that a woman will become President in their lifetimes and the nomination of a woman is not the milestone that it might have been even eight years ago. Electing the nation’s first black President, it seems, blunted the knife of history.

Many older voters and Democrats who want to see a woman President do not believe they must vote for Clinton. From Iowa to California, they have repeated an oft-heard refrain: We want a woman president, but we want the right woman. “Most of my girlfriends don’t want Hillary and they say she’s just not the right woman for the job,” said Caroline Motschman, a Sanders supporter who attended a rally late last month in San Diego. “There will be a right woman at some point, but let’s not jump the gun and just vote for her just because she’s a woman.” Some point to those like Elizabeth Warren or Kirsten Gillibrand.

Sanders is leaning on that as a tacit permission for his supporters to work against Clinton’s nomination. In recent weeks Sanders has sharpened his attacks against Clinton, criticizing Donald Trump and the Clinton Foundation in the same breath. He has also insisted that he cannot ask his supporters to back Clinton without some kinds of compromises that would remake the Democratic Party in his progressive image.

“The idea that I can snap my fingers and have millions of supporters march in line that is not what our effort is about,” Sanders told CNN on Sunday.

Clinton’s allies are starting to show exasperation with Sanders’ stubbornness. “But rules are rules, and the math is the math,” Clinton’s former spokesman turned House of Cards producer Jay Carson wrote in the New York Times. “Senator Sanders is not going to be the Democratic nominee. There’s staying in a race to cross the finish line with your head held high, and then there’s participating in or condoning language and actions that will damage the nominee and help Mr. Trump.”

Sanders shrugged off a reporter’s question on Monday about whether he was being “sexist” by spoiling a historic moment for Clinton. “So if Hillary Clinton runs for President, your point is that it is sexist for any man to oppose her?” Sanders scoffed. “I don’t think it is sexist.” He has insisted the superdelegates don’t count until the convention, a point he repeated to the AP even after the news organization made clear the math is not on his side.

Clinton has at times struggled when she discusses her gender. During her 2008 campaign, her advisers urged her to not run solely as a woman and to downplay her gender. Pollster Mark Penn went so far as to urge her to offset her gender by being more hawkish. Clinton heeded her family’s longtime advisers and pitched herself as a tough-nosed pragmatist who had seen history up close. Voters respected it, but instead seemed to be opting for Obama, who channeled optimism and potential in his own history-making campaign that seldom mentioned his race. Then, she shifted late in the primary to seem to embrace her own gender, bringing her mother and daughter out on the campaign trail for a pre-Christmas 2007 pitch. It was discordant for the less-engaged public.

Eight years later, Clinton started her campaign by overcorrecting at times, talking about her role as grandmother and policies to help families. She seemed to find even footing in time, though. Yes, she was doing roundtables with working mothers. But she was also talking about the night she sat across from Obama as the Navy SEALs took out Osama bin Laden.

Clinton’s treatment of her gender — and because of it — have been meticulously analyzed. Was she too shrill? Was she too hawkish? Was she too maternal?

Lost in all the punditry is this reality: Clinton’s late mother, Dorothy Rodham, was born on the same day Congress passed the 19th Amendment. Clinton’s mother was born into a country where she could not vote, let alone imagine her daughter being the nominee of a major political party. Clinton’s mother, were she still alive, would have celebrated her 97th birthday last week. And Clinton ended her previous campaign, with her family at her side, almost eight years ago to the day she won this time. This is personal for Clinton, for sure.

Asked by reporters on Monday about the historical significance of the nomination, Clinton said she was moved by the moment in history, and several times tried to push her comments on it to Tuesday’s rally on the Brooklyn waterfront.

“I do think it will make a very big difference for a father or a mother to be able to look at their daughter, just like they can look at their son and say, ‘You can be anything you want to be in this country, including President of the United States,’” Clinton said, allowing herself a brief moment of reflection at a senior center in Compton, Calif. She quickly pulled herself together and got back on script.

“I’ll have something to say tomorrow night,” she said and turned back to Trump. “Even if I weren’t running, even if I weren’t about to become the nominee, I would be making the case against Donald Trump.” And with that, she was back to glad-handing. History and its authors would have to be addressed later.

Most Popular on TIME
1
Who Should Be TIME’s Person of the Year for 2020? Vote Now
2
The Undoing's Fatal Flaw Was Its Disrespect for Its Audience
3
The 10 Best Podcasts of 2020 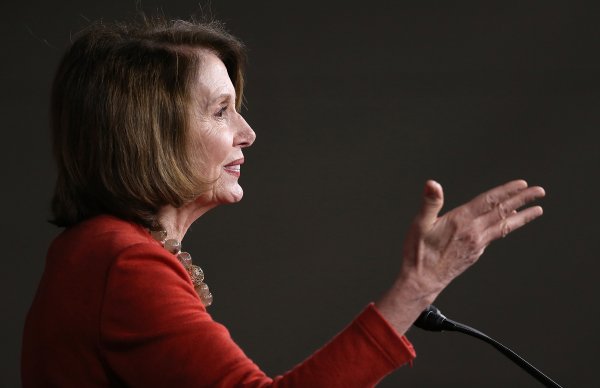