It's Not Just Brits Who Are Skeptical of the E.U.

European flags in front of the EU Berlaymont building in the centre of Brussels on March 23, 2016.
Mustafa Yalcn—Anadolu Agency/Getty Images
By Tara John

Euroskepticsm is on the rise in Europe, according to a new poll which found an average of 47% of respondents across 10 countries reporting unfavorable views of the European Union.

Ahead of the June 23 referendum on Britain’s membership of the E.U, Pew Research Center found the bloc has suffered a sharp drop in support over the past year. However, 7 in 10 respondents said that Britain voting to leave would be a bad thing for the European Union.

While 51% across 10 E.U. countries surveyed still hold favourable views of the E.U., there has been a dip in support in its largest member states: the favorability of the institution has seen a 17-point drop in France, a 16-point drop in Spain, an 8-point drop in Germany and a 7-point drop in the U.K. The latest polling shows the British electorate almost evenly split on whether to leave or remain within the E.U.

Much of this disaffection has been caused by the migrant crisis and economic issues on the Continent. According to Pew, “overwhelming majorities” in every country polled disapproved with how the E.U. has been handling the migrant crisis. This includes 94% in Greece, 88% in Sweden and 77% in Italy. The strongest approval came from the Dutch, with 31% agreeing with the way the E.U. has managed the historic influx of refugees.

Apart from Germany and Poland, majorities in eight of the 10 countries surveyed disapproved of the way the E.U. managed the continent-wide downturn. This includes around 90% of Greeks — whose country is still struggling to meet rigorous austerity targets in return for bailout funds — followed by Italians (68%), French (66%) and Spanish (65%).

In the 10 countries surveyed, the U.K., France, Germany, Greece, Hungary, Italy, Netherlands, Poland, Spain and Sweden, there is little enthusiasm for transferring more power to the EU’s headquarters in Brussels. A quarter or more in the majority of countries would prefer to keep the current status quo.

Pew’s survey was conducted between April and May 2016 and had more than 10,000 respondents in telephone and face-to-face interviews. 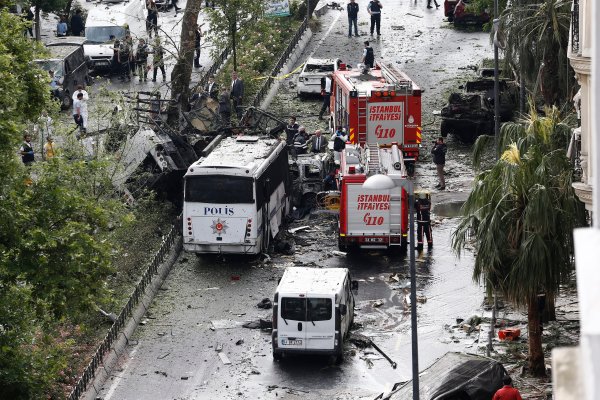 More Deadly Bombings in Turkey
Next Up: Editor's Pick