More Republicans have come out against Donald Trump’s incendiary statements about the federal judge presiding over a lawsuit against the defunct real estate education company Trump University. In a series of tweets on Monday, Ohio Gov. John Kasich, a former Trump rival, called the presumptive Republican nominee’s attack against Judge Gonzalo Curiel “flat out wrong.”

“Attacking judges based on their race &/or religion is another tactic that divides our country,” Kasich said on Twitter.

Trump has suggested that Curiel cannot be impartial in the case because of his Mexican heritage and the businessman’s proposal to build a wall along the southern border of the U.S. Curiel is an American citizen. He was born in Indiana to Mexican immigrants

Kasich is one of many Republicans who have pushed back against Trump in recent days. In an interview with NBC‘s Meet the Press on Sunday, Senate Majority Leader Mitch McConnell declined to say whether Trump’s comments were racist, but said he disagreed with the comments.

Tennessee Republican Sen. Bob Corker, the chair of the Senate Foreign Relations Committee, was also asked about the remarks on ABC’s This Week on Sunday. Corker said he does not condone the comments. Corker called on Trump to adjust his rhetoric going into the general election.

“I think that he’s going to have to change. I’m not talking about him necessarily changing his views, but I think that he’s moving into a different phase, he’s talking to the right people,” Corker said.

Former House Speaker Newt Gingrich, usually a vocal Trump booster, called his latest comments “inexcusable.” And later on Monday, Sen. Susan Collins of Maine said Trump’s statement runs contrary to American values. “Mr. Trump’s comments demonstrate both a lack of respect for the judicial system and the principle of separation of powers,” Collins said, according to Bloomberg. Sen. Kelly Ayotte of New Hampshire, who has said she will support the Republican nominee, but won’t endorse any particular candidate, also weighed in on the comments.

“His comments are offensive and wrong, and he should retract them,” Ayotte told NBC News.

In an interview that aired on Sunday, CNN’s Jake Tapper asked Trump repeatedly if saying someone could not do a particular job because of his or her race was racist—the businessman denied that it was. Sen. Ben Sasse of Nebraska responded via Twitter on Monday, suggesting the businessman’s statements were the definition of racism.

The statements continued to pour in throughout Monday afternoon. White House Press Secretary Josh Earnest weighed in, as well as former presidential contender Sen. Marco Rubio who said Trump’s line of attack is “wrong” and should end. Rubio said when he ran for the Republican nomination he warned something like this would happen.

Trump responded to the backlash Monday in an interview with Fox News, saying he has a right to defend himself against the judge.

“You have to respond,” Trump said. “All I’m trying to do is figure out why I’m being treated so unfairly by a judge.” 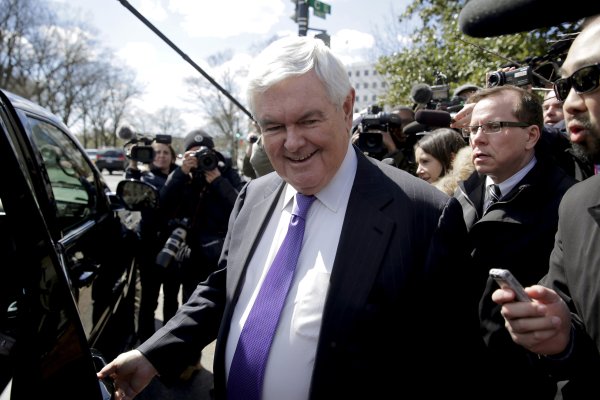 Newt Gingrich Blasts Trump's Attack on Judge as 'Inexcusable'
Next Up: Editor's Pick