Foods Endorsed by Celebrities Are Almost All Terrible for You

Almost every food or drink a music celebrity endorses and promotes through commercials and advertisements is unhealthy, according to a new study from NYU researchers. That’s a shame, the study authors argue, since most of the stars promoting these products—from One Direction to Beyoncé—are popular among kids and teens.

In the report, published Monday in the journal Pediatrics, NYU Langone Medical Center researchers combed through Billboard Magazine’s “Hot 100” song charts from 2013 and 2014. They confirmed celebrities’ popularity by looking at who won at the Teen Choice Awards as well as the number of views of celebrity endorsements they had on YouTube. The study authors also looked at all food and drink endorsements between 2000 and 2014 recorded in the advertisement database AdScope. Overall, there were around 313 million views of YouTube videos of celebrity food and beverage endorsements.

The most common foods and drinks endorsed by the musicians were soda, sugary drinks, fast food and sweets. The researchers assessed the nutritional makeup of the products and of the 26 food products in the ads, 81% were “nutrient poor.” Only one of the food products—Wonderful Pistachio—had a healthy nutrition score, and was endorsed by Psy. Taylor Swift has promoted Diet Coke, which is not high in nutrients and there’s some evidence to suggest that artificial sweeteners are not as healthy as they’ve been advertised.

“Teens are seeing a lot of ads for these types of products that are associated with things like obesity and childhood diabetes,” says study author Marie Bragg, an assistant professor in the department of population health at NYU in a video about her research. “We already know that other studies have shown that exposure to food ads can lead young people to overeat in the short-term.”

The study is the first to show how many music celebrities are involved in food advertising. “Which is important because some of these contracts are worth millions of dollars, suggesting that food companies really get a lot of value out of them,” says Bragg. For example, the researchers note that in 2012, Beyoncé signed an estimated $50 million endorsement deal with Pepsi, and Justin Timberlake received an estimated $6 million for his role in the McDonald’s “I’m lovin’ it” jingle.

You can check out the study here to see what unhealthy products celebrities are endorsing. The study authors are calling for more research on the effect of music celebrities’ endorsements on children and adolescents. 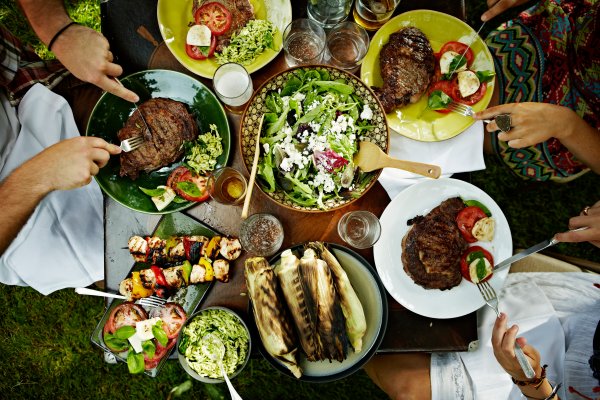 4 Hidden Dangers In Your Summer Cookout
Next Up: Editor's Pick