What Muhammad Ali Meant to Louisville

“They didn’t come out of no ghetto,” Cassius Clay Sr. told author Thomas Hauser for Muhammad Ali: His Life and Times. “I raised them on the best street I could: 3302 Grand Avenue in the west end of Louisville.”

He was talking about his two boys, the elder of whom — Ali, the former Cassius Clay Jr. — died at age 74 on Friday. There may at first seem a little dissonance in an athlete as urbane and adored as Ali hailing from Louisville, Ky., the 238-year-old hub for shipping and manufacturing on the Ohio River. Though the city is the only one to have produced four heavyweight champs, the other three (Marvin Hart, Greg Page and Jimmy Ellis) mustered hardly a fraction of Ali’s fame and flair.

Louisville, naturally, is proud of Ali, the native son, whose first pro fight took place in Freedom Hall in 1960. “Muhammad Ali belongs to the world, but he only has one hometown. The Louisville Lip spoke to everyone, but we heard him in a way no one else could — as our brother, our uncle, and our inspiration,” Mayor Greg Fischer said in an address Saturday morning. (The city had its share of Ali detractors during his years atop boxing, especially after he joined the Nation of Islam and changed his name, but no more so than in the rest of the nation.)

But Ali, too, was proud of Louisville. He chose the city as the site for his museum, the Muhammad Ali Center, which highlights above his athletic career his six “core values”: confidence, conviction, dedication, giving, respect and spirituality. “Muhammad and [his wife] Lonnie could have put the museum anywhere,” says Donald Lassere, its CEO since 2012. “But they put it here.”

Such harmony between hero and hometown would have been hard to imagine decades ago. In some of his most famous remarks, describing in 1967 why he would refuse to be drafted into military service for the war in Vietnam, Ali had said, “Why should they ask me to put on a uniform and go 10,000 miles from home and drop bombs and bullets on brown people in Vietnam, while so-called Negro people in Louisville are treated like dogs and denied simple human rights?” He wrote in his autobiography that he had thrown his Olympic gold medal off a bridge in town and into the Ohio after being denied service at a restaurant, and then harassed by a white biker gang because of his race. (Many Ali observers have argued that this story is embellished.)

But Ali and his birthplace reconciled as time passed. As he became a bigger global icon, he saw an opportunity to inspire thousands of children closer to home, despite his battle with Parkinson’s disease. Says the Rev. Charles Elliott, the pastor of the King Solomon Missionary Baptist Church (where Ali’s father was a member of the congregation), “Even though he couldn’t speak good, he still had a good mind. He’d go anywhere he thought his presence would be a help to people in this city, especially children.”

Lassere says, “Muhammad saw the progress the city has made with regard to welcoming people of all different persuasions. When people think of Louisville, they don’t think of a diverse, cosmopolitan city. But that’s exactly what it is.”

Ali will have a family memorial on Thursday and then a larger event in downtown Louisville on Friday.

“The city will be pulling out all the stops,” Fischer says. “He’s our guy.” 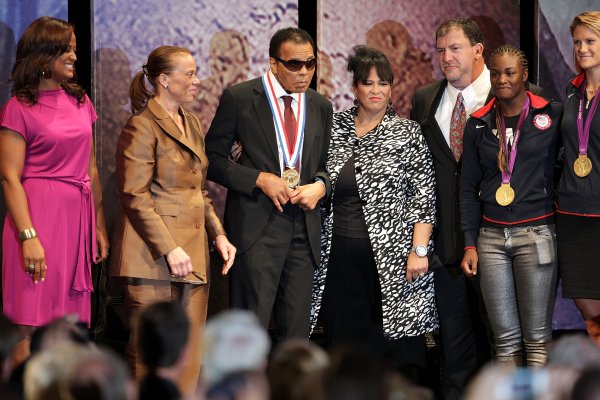 How Muhammad Ali's Children Mourned His Death
Next Up: Editor's Pick