Muhammad Ali’s heart kept beating as the rest of his organs failed, according to one of his daughters, who shared a touching story Saturday about her late father’s final moments.

Daughter Hana Ali and some of her siblings took to social media to praise their father and remember him as a hero after the iconic boxing champion died Friday at 74. The boxer had seven daughters and two sons, according to US Weekly.

“Our hearts are literally hurting. But we are so happy daddy is free now,” Hana Ali wrote on Twitter. “We all tried to stay strong and whispered in his ear, ‘You can go now. We will be okay. We love [you]. Thank you. You can go back to God now.’”

“All of us were around him hugging and kissing him and holding his hands, chanting the Islamic prayer,” she recalled. “All of his organs failed but his HEART wouldn’t stop beating. For 30 minutes…his heart just keep beating. No one had ever seen anything like it. A true testament to the strength of his Spirit and Will!”

The legendary boxer’s youngest son, Asaad Amin, wrote on Instagram that he’s able to stay strong in difficult times because of what his father taught him. “Forever grateful for everything you have ever gave me.. You’ve shown me how to love the world in ways I didn’t know possible. You’ve shown me how to be brave and courageous in situations beyond my belief! You’ve taught me so much the last 25 years things that will forever be imprinted in my soul,” he wrote, alongside a post of his father in the ring.

“I’m able to sit here and right this post without falling apart because I honestly know you are in a greater place,” Asaad Amin added. “And I’m happy you get to go home to grandma now I know she has missed you like crazy! No one will ever touch this earth the way you did. God has came down and took back one of his kings!”

Another one of Ali’s daughters, Rasheda Ali, called her father the “greatest man that ever lived” in a Twitter post accompanied with a photo of the two of them. “Daddy my best friend & my Hero,” she wrote. “You R no longer suffering & now in a better place.”

The boxing champion’s eldest child, Maryum Ali, shared the same sentiment. “I know him as THE GREATEST father,” she wrote on Twitter. “I love you so much, Dad. His spirit visited me last night. Thank you world for your love & support!!!”

Daughter Laila Ali, who followed in her father’s footsteps to become a retired undefeated professional boxer, has yet to comment publicly about the loss. On Friday, she posted a touching photo on Facebook of him with her daughter and thanked her fans for their well wishes. 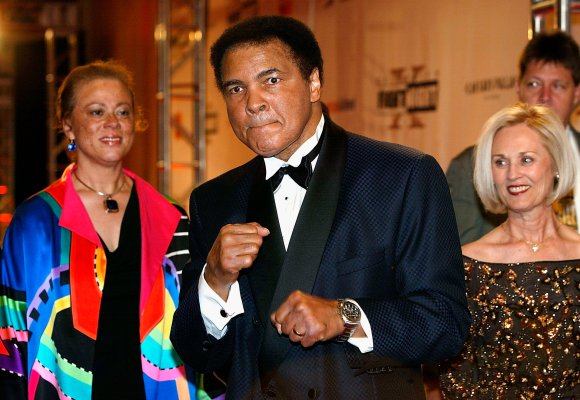 What to Know About Parkinson's Disease After Muhammad Ali's Death
Next Up: Editor's Pick