How Muhammad Ali First Got in the Ring

The boxing career of Muhammad Ali, who died Friday at the age of 74, began when he was just a 12-year-old whose bike had been stolen.

Ali—then Cassius Clay—first appeared on the cover of TIME on March 22, 1963. That cover story detailed his rise from kid dreamer to boxing great, a trajectory that arguably began when he became the proud owner of a shiny $60 bicycle and pedaled to a fair at the Columbia Gym in downtown Louisville, Ky.

Ali soon began more rigorous training, jumping rope for hours to toughen his legs and hitting heavy punching bags to strengthen his swing. He practiced in front of a mirror to improve his reflexes. “On weekends, he wandered about like a nomad, taking on all comers in amateur tournaments all across the U.S.,” TIME wrote.

One day in February 1961—before he was considered serious boxing competition—Ali was in Miami, where Swedish boxer Ingemar Johansson was training. Ali asked Johansson, who had won the 1959 heavyweight title, if he could “spar a little” with him, TIME wrote. As Ali began to “dance rings around Johansson,” the boxing champ grew angry. “What does this kid do?” he asked. “Ride a bicycle ten miles a day?” 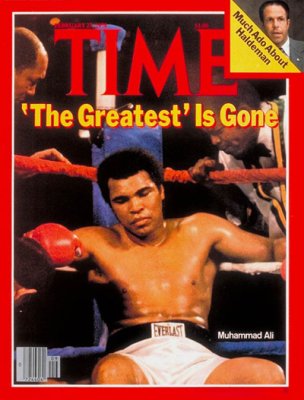 Muhammad Ali Kept Coming Back, In and Out of the Ring
Next Up: Editor's Pick