No sooner do I write a column lamenting Hillary Clinton’s inability to “win” news cycles than she starts winning them. She won one the old-fashioned way in California Thursday, with substance—but also with high-class mockery and disdain—with her brilliant speech about Donald Trump’s ridiculous attempts to articulate a foreign policy. The speech was so potent that Paul Ryan’s perfectly timed attempt to steal her thunder, by finally endorsing Trump, fell flat.

Why? Because Clinton used blunt, confident language for a change. There was almost a Thatcherite clarity to her attack on Trump’s foreign policy ideas:

It was devastating and Trump’s response was lame. He criticized the way she read from the teleprompter (actually she was pretty good…for her). And she raised an issue that not even Mitt Romney or Ted Cruz had taken on: Trump’s mental stability. “I’ll leave it to the psychiatrists to explain his” affection for dictators who have no love for the United States, she said. Sentence after sentence, example after example, hammered down on the tycoon’s head: his support for the Tiananmen Square massacre, his admiration for Vladimir Putin and Kim Jung Un, his constantly shifting, feckless positions on ISIS.

I suspect that this speech will have tremendous impact on this campaign. It may even work to Clinton’s benefit in the California primary to be held next Tuesday. The confidence of her rhetoric should have sent a message to Bernie Sanders: it’s time for you to suspend your windmill-tilting; there is serious business, the demolition of Donald Trump, to focus on now. She has shown a toughness and a tone and a level of impolitic candor that she has never demonstrated before. Going forward, I can see her using that same tone on other topics: Trump’s fetid immigration policy, his proposed budget, his shaky grasp on the U.S. Constitution.

One other point: On the day before Clinton gave the speech, she received a Republican endorsement that really mattered. It was from Retired Colonel Pete Mansoor, chairman of the military studies department at Ohio State, who had been a top aide to David Petraeus during the planning and execution of the Iraq surge. Mansoor is not a politician; quite the opposite. He is an exemplar of the best military tradition: duty, honor, country. He told Chris Hayes on MSNBC that Trump lacked the character to be President. He said that he’d never voted for a Democrat before in his life, but he would vote for Clinton this time. I suspect that Mansoor reflects the feelings of the U.S. military brass.

The race will twist and turn over the next five months. Clinton may have a bad week next week, especially if she loses California. She still has obvious weaknesses as a candidate and as a human being. But this speech demonstrates that she knows just exactly how to go after Trump. His idiot-savant narcissism will never seem the same. 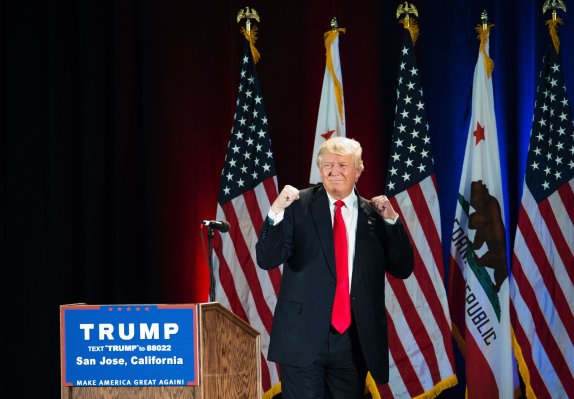 Donald Trump Calls for Hillary Clinton to Be Jailed
Next Up: Editor's Pick