A member of the Iraqi government forces gestures as they take a position outside al-Shuhada neighborhood, south of Fallujah, during an operation to regain control of the area from the Islamic State group on June 3, 2016. Iraqi forces on May 22-23 launched a vast offensive aimed at retaking the IS bastion of Fallujah, a city only 50 kilometres (30 miles) west of Baghdad that was the first to fall out of government control in 2014. / AFP / AHMAD AL-RUBAYE (Photo credit should read AHMAD AL-RUBAYE/AFP/Getty Images)
AHMAD AL-RUBAYE—AFP/Getty Images
By Ian Bremmer

Syria overtook Iraq as the biggest and bloodiest mess in the Middle East a few years back. But while the spotlight has shifted to its neighbor, Iraq is still beset by ISIS and political infighting. These five facts explain what you need to know about Iraq today.

1. Current political situation
Iraq’s current prime minister, Haider al-Abadi, took office in 2014. Hopes were high for Abadi, who installed a government with both Sunni and Kurdish politicians in key positions. (Abadi himself is Shia). For a country long-divided along sectarian lines—approximately 20 percent of Iraqis are Sunni, while 60 percent are Shia—this was a welcome change. Unfortunately, Abadi’s government has been stymied—both by political parties determined to resist his cabinet appointments and a political system rampant with corruption. How rampant? Enough that Iraq currently ranks 161 out of 168 countries on Transparency International’s Corruption Perception Index, behind disasters like Zimbabwe, Haiti and Venezuela.

Into the current vacuum of power stepped Muqtada al-Sadr, a Shia cleric with a loyal following that also includes some Sunnis. He hails from a prominent clerical dynasty; his father and two elder brothers were assassinated by Saddam Hussein in 1999. It’s difficult to pigeonhole Sadr’s politics, but you can call him a populist and political opportunist. At the moment, he is pushing for a technocratic government and has led protesters into Iraq’s Green Zone and parliament building. The irony is that Abadi wants a technocratic reshuffle himself, but he continues to face stiff resistance from Iraq’s parliament, which is worried that the cabinet shakeup would dilute their power. The result is political paralysis.
(Carnegie Center, Transparency International)

2. The economics of it all
An oil price that has fallen from $115 per barrel in 2014 to about $50 today continues to wreak havoc on exporters like Iraq, which depends on oil sales for 60 percent of its GDP and 90 percent of its government revenue. Iraq’s oil output actually rose 12.9 percent in 2015, but that wasn’t nearly enough to offset the lower price it earned for every barrel.

For Iraq to balance its budget, the price of oil would have to reach $60. Iraq is in much stronger shape than Libya, which need oil prices to reach $195.20 to balance its books, but Iraqi leaders know they had better brace for a difficult road ahead. They’ve already reached an agreement with the International Monetary Fund for a $5.4 billion standby agreement, with the ability to unlock another $15 billion if needed over the next three years. That money will help, but it won’t do much to address the underlying weakness of the Iraqi economy. Unemployment is north of 25 percent. About 40 percent of those who do have are employed by a government that has all but ground to a halt.
(Economist (a), Bloomberg, UN, World Bank, Washington Post, Reuters, Economist (b))

3. Internal displacement
Iraq is also facing a serious demographic crisis, with more than 3 million internally displaced people (IDPs) within the country. This is nothing new for Iraq; Iraqis have been fleeing violence for decades. But Iraq’s bloody civil war against ISIS and the spillover from Syria have scaled things to extremes—Iraq added another 2.5 million IDPs in 2014 alone. Some 2.4 million people in Iraq are deemed “food insecure” by the UN, and another 6.6 million are in need of water and sanitation. These realities make it all the more difficult for Iraq to regain any semblance of political and financial balance.
(UN, Brookings)

4. Progress against ISIS
But there’s also good news coming out of Iraq. In particular, the fight against ISIS is showing real progress for the first time since the terror group’s rise in 2014. About 40 percent of the territory ISIS once controlled in Iraq has been recaptured, thanks in part to the 8,000 airstrikes launched against ISIS targets by Western coalition forces.

And unlike in Syria, Iraq’s security forces—a patchwork of Shia militia groups, Iraqi Army counterterrorism soldiers and local police forces—present a semi-united front against ISIS. Having recaptured the city of Ramadi this past December, Iraqi security forces have turned their attention toward Fallujah in the past two weeks. Fallujah has long been a stronghold for Sunni extremists and was the first major city to fall to ISIS in January 2014. Losing Fallujah would deal a significant blow to the morale of ISIS, not to mention the group’s narrative of an inevitable march towards a global caliphate. Iraqi security forces can outmatch and outlast the ISIS fighters that have been left behind to defend the city.
(BBC)

5. Iran in Iraq
But it’s not that simple. As the battle for Fallujah rages, international observers are increasingly worried about the 50,000 civilians trapped in the city. So is the U.S., which has learned the hard way that dead Iraqi civilians stokes sectarian tensions, the same tensions that gave rise to ISIS in the first place.

Just as concerning to Washington is the fact that Shiite Iran has been playing an increasingly large role in the domestic affairs of Iraq. Shia militia groups working in concert with Iraqi soldiers who have been trained by the US are backed by Iran. Muqtada al-Sadr? Also backed by Iran, or at least used to be in the not-so-distant past. This problem has Washington justifiably worried given Tehran’s well-documented history of sponsoring militant proxies throughout the Middle East. And given Saudi fears of Iran’s expanding regional influence—the two countries are bitter rivals—this is a recipe for trouble, both inside and outside Iraq’s borders.
(Al Jazeera) 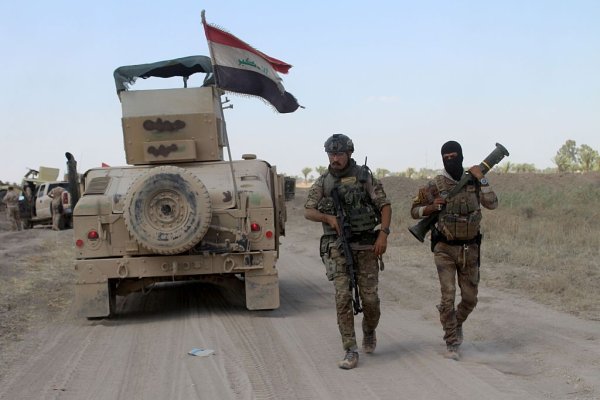 A Victory Over ISIS in Fallujah Could Hurt Iraq
Next Up: Editor's Pick