The Brave New World of the Synthetic Human Genome

Puneet Opal is a neurologist and a director of the Physician-Scientist Training Program at Northwestern University Feinberg School of Medicine.

Last month there were alarming news reports of a “secret meeting” where scientists discussed plans to create a synthetic human genome. These plans have now been confirmed, and the project has been dubbed the “Human Genome Project-Write” (HGP-Write). The project aims to manufacture the entire human genome by adding together chemical nucleotides that form genes.

Are we on the verge of a dystopian Gattaca-like world where genetically engineered humans dominate, and normal folk are relegated to the underclass? Or perhaps more frightening, can we create human beings from scratch, using non-living material? Thankfully, the answer to both questions is no.

The production of synthetic genetic material is not new. The first artificial genes were synthesized in the 1970s and were successfully incorporated into bacteria and other organisms to produce life-saving growth factors, including insulin. What’s new is the ability to synthesize exceedingly long genetic sequences, culminating with the synthesis and transplantation of the entire genome of a bacterium. The genome of this bacterium is one million base pairs long, while the human genome is about 3,000 times longer. Scaling the technology to synthesize the whole human genome will take at least 10 years, likely more.

If we do achieve the synthesis of the human genome, we are still far, far away from creating human life from non-living parts. The information in the genome is necessary, but not sufficient for creating life. The genome has to be packaged correctly, epigenetic changes need to be made, and the correct complements of enzymes and structural proteins have to be provided. Even if we get the initial conditions correct, the formation of life may represent the edge of chaos with unpredictable results. The production of complex life-forms (such as humans) may well be impossible.

While the prospect of a fully synthetic human is in the distant future, recent advances in genetic engineering—through a technology called CRISPR—have given us the ability to alter our genes with astonishing ease. CRISPR can be used to make permanent changes in human genes, and these changes can be transmitted to subsequent generations. Many scientists have recognized the profound ethical implications of this technology and have called for a moratorium on making inheritable changes until there is “broad societal consensus.”

This response to the CRISPR conundrum provides us with a roadmap to address advances in synthetic genomic technology. Synthetic genomics has many potential benefits including the production of new vaccines, more effective drugs and novel biofuels. But there are real concerns about bioterrorism and inadvertent environmental release, along with the ethical considerations of altering life. It behooves us to address these concerns and be vigilant and prepared for unexpected challenges.

The Presidential Commission on Bioethics reviewed the field of synthetic biology and identified five guiding principles: beneficence, responsible stewardship, intellectual freedom, justice and democratic deliberation. All these are important ethical guidelines, with “democratic deliberation” being the one where we are most likely to fall short. Among some scientists, there is a concern that irrational public fear of novel technologies may create a backlash and result in unnecessary restraints on scientific progress. This concern is unfounded, and a secretive strategy would only serve to enhance suspicions of a nefarious intent.

To their credit, the HGP-Write group has now promised “public discourse” in the planning and implementation of this project. As we enter the brave new world of synthetic genomics, an open and honest approach will help us reap the benefits while avoiding the pitfalls that surely lurk ahead. 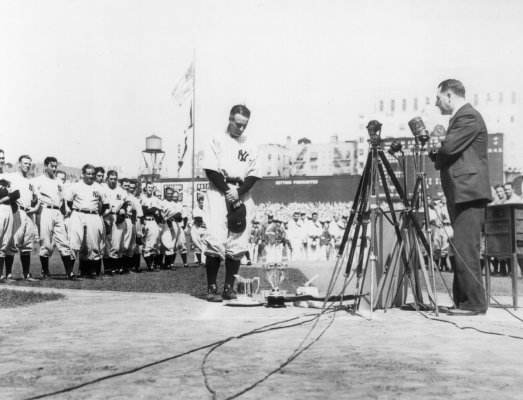 Lou Gehrig Died 75 Years Ago. His Disease Still Devastates
Next Up: Editor's Pick