If you only read one thing: Hillary Clinton demonstrated a remarkable ability to attack Donald Trump Thursday as she laid into his foreign policy in strikingly personal terms. Billed as a major policy address, it was more of a major political one, as Clinton set substance aside to make the case that Trump is a danger on the international stage. The assault marked a major shift for Clinton, who had previously criticized Trump’s tone and policy, and the viciousness of her tone ensured it would break through into the political bloodstream. The speech demonstrates the lessons Clinton’s team is learning from the contentious GOP primary even as she faces a fight to the finish in California with Bernie Sanders. In the Golden State home stretch, the attack was designed to contrast her ability to take it to Trump to Sanders’, while laying the groundwork for the fall campaign.

Donald Trump was uncharacteristically slow to respond to Hillary Clinton‘s attack Thursday, only criticizing her for using a teleprompter and declining to substantively rebut a long list of alleged flaws with his candidacy. Trump’s counter-punch to Clinton lacked its usual resonance. At a rally in San Jose, Trump called Clinton a criminal and absolved vanquished rival Ted Cruz of his “Lyin’ Ted” label. Meanwhile, Trump secured the endorsement of Speaker of the House Paul Ryan after a weeks-long dance. Ryan, who a week ago said nothing had changed in his thinking, embraced Trump after some of his worst press—arguing he was only looking to defeat Clinton and maintain GOP majorities in Congress. The tepid endorsement follows a pattern of other top Republicans who have declined to fully embrace Trump even as they plan to stump for him.

And for good reason, as Trump fueled a fire over his controversial comments about a federal judge presiding over the Trump University lawsuit. Last week, Trump said the judge should recuse himself because he is of Mexican heritage. The Indiana-born jurist is the son of immigrants, and Trump told the Wall Street Journal Thursday that simply being of Mexican-descent was a conflict of interest for the judge, because of his “build-the-wall” stance. Republican lawmakers will be pressed to condemn Trump’s comments—and if they don’t, could deepen their party’s substantial troubles among Latino voters for more than this election.

Clinton’s extended attack against Trump may have signaled her willingness to get dirty in taking the fight to Trump, but that doesn’t mean she’ll refocus her campaign around criticizing her opponent, aides said. At her two events after the “policy” speech, Clinton was back to routine stump speech and talking points, perhaps wary of leaning too far into the Trump attacks after watching his GOP rivals flail in their efforts against him over the last six months.

Paul Ryan Endorses Donald Trump
It’s an abrupt about-face for the speaker, who has been outspoken about his clashes with the controversial businessman [Washington Post]

“Making Donald Trump our commander-in-chief would be a historic mistake. It would undo so much of the work that Republicans and Democrats alike have done over many decades to make America stronger and more secure. It would set back our standing in the world more than anything in recent memory. And it would fuel an ugly narrative about who we are – that we’re fearful, not confident; that we want to let others determine our future for us, instead of shaping our own destiny.” — Hillary Clinton in a foreign policy address in San Diego Thursday

“Ted Cruz is no longer a liar. We don’t say ‘Lyin’ Ted’ anymore! We love Ted.” — Donald Trump on his vanquished rival at a rally in San Jose Thursday evening

People Are Defending Trump University. But They Depend on Donald Trump for Business [Associated Press] 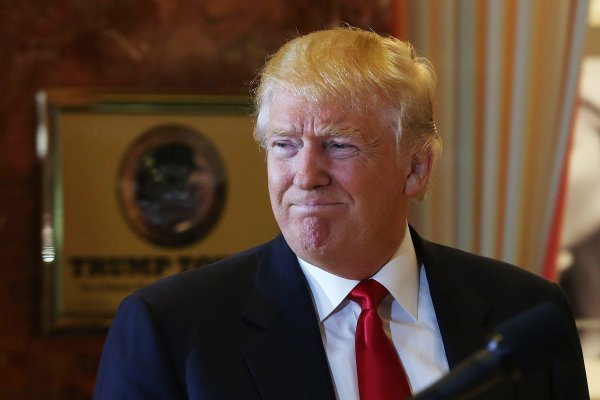 Donald Trump Ramps Up Attacks Against Judge in Trump University Case
Next Up: Editor's Pick