Clearly enjoying herself, a confident Hillary Clinton unleashed a comprehensive indictment of Donald Trump’s foreign policy on Thursday and questioned his credentials to serve as the President.

The former Secretary of State’s speech in San Diego was one of her best showings so far in this campaign and a signal how she plans to spend the next five months campaigning against the billionaire real estate mogul. At times amusing and scathing, Clinton’s foreign policy address was a reminder that, on that topic, she is far more experienced than Trump.

“As you know so well, Americans aren’t just electing a President in November. We’re choosing our next Commander in Chief, the person we count on to decide questions of war and peace, life and death,” Clinton said. “I believe that person the Republican have nominated for President cannot do the job.”

Electing Trump, she added, “would be a historic mistake.”

For Clinton, the moment came with a sense that, despite the primaries that continue against her Democratic rival Bernie Sanders, she will be the nominee. She ignored Sanders and instead kept her focus on Trump. She picked apart his utterances on foreign affairs, going back to the 1980s, and eviscerated him as ignorant and arrogant in equal measure.

“Donald Trump’s ideas aren’t just different. They are dangerously incoherent. They not even really ideas. They’re a series of bizarre rants, personal feuds and outright lies,” she said to cheers. “He is not just unprepared. He is temperamentally unfit to hold an office that requires knowledge, stability and immense responsibility. This is not someone who should ever have the nuclear codes because it’s not hard to image Donald Trump leading us into war because someone got under his very thin skin.”

Throughout her 35-minute speech, Clinton repeatedly came back to the risks that come with a Trump presidency: a global economic meltdown would flow from a Trump-led trade war, terrorism could spread like wildfire and America’s allies would back away from the country. Decades of foreign policy would find itself unraveling, Clinton said, and America’s image would crumble as it engaged in war crimes.

“He praises dictators like Vladimir Putin and picks fights with our friends, including the British Prime Minister, the mayor of London, the German Chancellor, the President of Mexico and the Pope,” Clinton said. “He says he has foreign policy experience because he ran the Miss Universe pageant in Russia.” Clinton seems to have learned what Trump’s GOP rivals did not: that to beat Trump, you have to play by his rules, and that means belittling opponents.

“I will leave it to the psychiatrists to explain his affection for tyrants,” Clinton jabbed.

Clinton spoke to a crowd of about 300 in a ballroom in San Diego’s Balboa Park before 19 American flags. The enthusiastic audience repeatedly interrupted Clinton’s speech with laughter at her Trump barbs. Hundreds more were waiting outside, cheering along as the sound was piped to them.

“Making the right call requires a cool head and respect for the facts,” said Clinton, who as the nation’s top diplomat visited 112 countries. “It also takes humility, knowing you don’t know everything because if you’re convinced that you’re always right, you’ll never ask yourself the hard questions.”

Many of Clinton’s observations were part of previous remarks and interviews, but packaged together, it painted a picture of a political neophyte who simply was not up to the job of leading the country’s foreign policy machine. “Imagine Donald Trump sitting in the Situation Room, making life-or-death decisions on behalf of the United States,” Clinton said, returning to the risks of a Trump presidency. “Imagine if he had not just his Twitter account at his disposal when he’s angry, but America’s entire arsenal … Do we want his finger anywhere near the button?”

She repeatedly cast him as thin-skinned.

“Being interviewed on the same episode of 60 Minutes as Putin was is not the same thing as actually dealing with Putin,” Clinton said. “We all know the tools Donald Trump brings to the table: bragging, mocking, composing nasty tweets. I’m willing to bet he’s writing a few right now,” she said to laughter.

“Bad performance by Crooked Hillary Clinton! Reading poorly from the telepromter! She doesn’t even look presidential!” he fired off from his Twitter account, including a misspelled word. And again: “Crooked Hillary no longer has credibility – too much failure in office. People will not allow another four years of incompetence!”

Clinton merely kept the attacks coming. She clearly had irked Trump. And an angry Trump is one that can veer to the erratic. And that only proves her point. 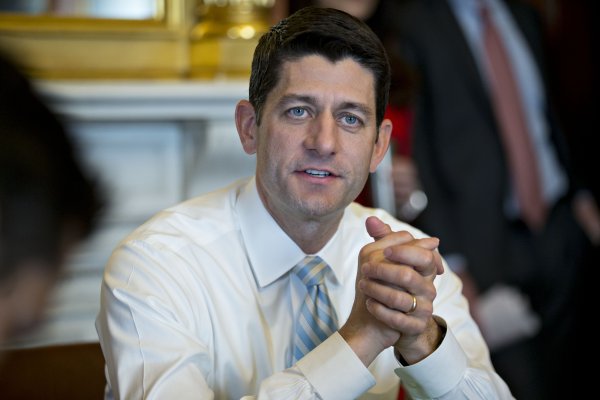 Paul Ryan Says He Will Vote for Donald Trump
Next Up: Editor's Pick